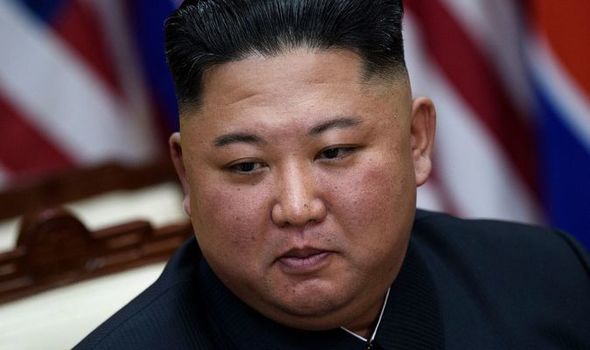 The move against the two organisations, named as the Ministry of State Security Bureau 7 and Ministry of People’s Security Correctional Bureau, is part of the first sanctions under Britain’s new global human rights regime.

A North Korean Foreign Ministry spokesman said: “Britain’s latest move is a flagrant political plot to jump on the bandwagon of the United States’ inimical policy.

“We strongly condemn and reject the UK’s daring to impose sanctions on the institutions responsible for our country’s security as violent interference in domestic affairs.”

The sanctions will take the form of asset freezing.

North Korea and the United States have failed to find a compromise over North Korea’s nuclear weapons programme or international sanctions imposed on Pyongyang.

Recent North Korean statements, including one by Kim Yo-jong, the sister of North Korea’s leader Kim Jong-un, have reiterated Pyongyang’s objections to what it sees as hostile and self-serving policies of the United States.

Despite the breakdown in relations, US Secretary of State Mike Pompeo said he was “very hopeful” about resuming talks with North Korea and appeared to leave open the possibility of another summit between the countries’ leaders, despite Pyongyang saying it has no intention of returning to negotiations.

Winding up three days of talks in Seoul, US Deputy Secretary of State Stephen Biegun earlier rejected speculation he was seeking to meet North Korean officials during his visit, but said the United States was open to talks.

Amid long-stalled US efforts to get North Korea to give up its nuclear weapons, Mr Pompeo said the United States was continuing its efforts to re-establish dialogue with Pyongyang but declined to provide specifics.

Related posts:
Best News
Families prepare for Halloween with restrictions in place amid coronavirus
Frederick auto dealership adds solar panels, canopies to guard against hail and tap the sun’s power
‘Thank God we have that’: Wattpad author says writing gig became coronavirus emergency fund
Trump WILL be removed by Secret Service if he loses and won’t leave, claims Scaramucci
Campaign 2020: Let’s Never Do This Again
Recent Posts
This website uses cookies to improve your user experience and to provide you with advertisements that are relevant to your interests. By continuing to browse the site you are agreeing to our use of cookies.Ok