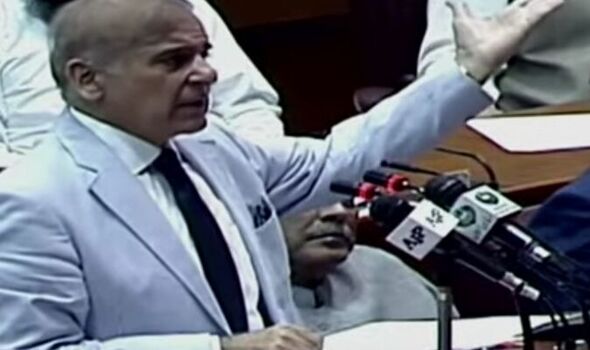 Mr Sharif, brother of three-time ex-prime minister Nawaz Shari, was the leader of an opposition coalition who worked to depose Mr Khan. The 70-year-old was elected to the National Assembly in 1990. He fled Pakistan after the military coup nine years later before returning in 2007. His widely-expected victory will see him take the oath of office at 8.30pm local time.

Presiding speaker Ayaz Sadiq announced after the delayed vote on Monday afternoon: “Shehbaz Sharif is declared to be elected as the prime minister of the Islamic Republic of Pakistan.”

Mr Sharif served as chief minister of Punjab, Pakistan’s most populous province, before Mr Khan came into power in 2018.

During that time, according to analysts, Mr Sharif proved to have a “can-do” administrative style that he displayed when working closely with China on Beijing-funded projects.

He also said in an interview last week that good relations with Washington were critical for the South Asian state– an approach in stark contrast to Mr Khan’s recently hostile ties with the US.

He had tried to block a previous attempt to bring a no-confidence vote against him by dissolving parliament and calling for a snap election.

The country’s Supreme Court, however, upheld an opposition petition that his actions were unconstitutional and ordered the no-confidence vote to go ahead.

The new Prime Minister, part of the wealthy Sharif dynasty, submitted his candidacy for the top job on Sunday, with several among the opposition swiftly expressing their support.

Mr Khan, 69, was the first Pakistani prime minister to be ousted by a no-confidence motion after days of political drama led to a 13-hour parliamentary session that eventually removed him from power.

Claims by opponents he failed to abide by his promise to revive the economy and tackle corruption meant his term did not quite hit the four-year mark – an unsurprising detail considering no prime minister has finished a full five-year term since Pakistan’s independence from Britain in 1947.