Islamabad, Pakistan – Pakistan shot down two Indian air force fighter jets and launched air strikes at six targets in Indian-administered Kashmir, its military says, in a dramatic ratcheting up of tensions between the two nuclear-armed neighbours.

Two Indian air force pilots were taken into custody, Ghafoor said, with one of them being treated for wounds at a military hospital.

India’s foreign ministry spokesperson has confirmed that one of their pilots is missing and that they are “ascertaining the facts”.

“In this engagement, we have unfortunately lost one Mig-21. The pilot is missing in action. Pakistan has claimed that he is in their custody,” Raveesh Kumar told a briefing.

Kumar also announced that a Pakistan jet was hit as it took part in an operation “to target military installations on the Indian side”. “The Pakistani aircraft was seen by ground forces falling from the sky on Pakistan.”

Pakistani Prime Minister Imran Khan called on Wednesday for talks with India and hoped “better sense” would prevail so that both sides could de-escalate.

“History tells us that wars are full of miscalculation. My question is that given the weapons we have can we afford miscalculation,” Khan said during a brief televised broadcast to the nation. “We should sit down and talk.”

Separately, Ghafoor said that Pakistani aircraft had fired on six targets in Indian-administered Kashmir, hitting “open spaces” as a demonstration of Pakistan’s capability to hit Indian targets. The intention, the military spokesperson said, was not to cause any civilian or military casualties.

“[The] sole purpose was to demonstrate our right, will and capability for self-defence,” read a Pakistani foreign office statement released shortly after the attacks. “We have no intention of escalation but are fully prepared to do so if forced into that paradigm.”

Speaking to reporters at military headquarters in Rawalpindi, Ghafoor said Pakistan did not wish to escalate hostilities and urged India to engage in dialogue.

“This was not a retaliation in a true sense, but to tell Pakistan has capability; we can do it, but we want to be responsible, we don’t want an escalation, we don’t want a war,” he told a news conference.

Police officials in Indian-administered Kashmir said that two pilots and a civilian had died after an Indian air force plane crashed in Kashmir, but did not confirm if the plane had been shot down by Pakistani forces.

Also on Wednesday, Pakistan closed its airspace for all commercial flights, the Civil Aviation Authority said in a notice.

Tensions have been high between the two nuclear powers since a February 14 suicide attack killed at least 42 Indian security forces personnel in the Indian-administered Kashmir town of Pulwama.

India blamed Pakistan for “controlling” that attack, and Indian Prime Minister Narendra Modi vowed to take military action to retaliate. The attack was claimed by armed group Jaish-e-Muhammad, which has had a presence in Pakistan. The Pakistan government and military deny any involvement in the attack.

On Tuesday, Indian aircraft entered Pakistani airspace in Pakistan-administered Kashmir to fire four bombs that landed in the village of Jaba, about 10km outside of Kashmir in Khyber Pakhtunkhwa province.

In a foreign ministry statement, India claimed it had destroyed a “Jaish-e-Muhammad camp” in Jaba, but Pakistan’s military and witnesses at the scene said the bombs struck a mostly uninhabited forest. One man was wounded in the attacks, with local hospital officials reporting no other casualties.

It was the first time Indian jets had entered and fired while within Pakistani airspace since a war between the two countries in 1971.

India and Pakistan have fought two of their three wars over the disputed territory of Kashmir, which both claim in full but administer separate portions of, divided by the Line of Control. 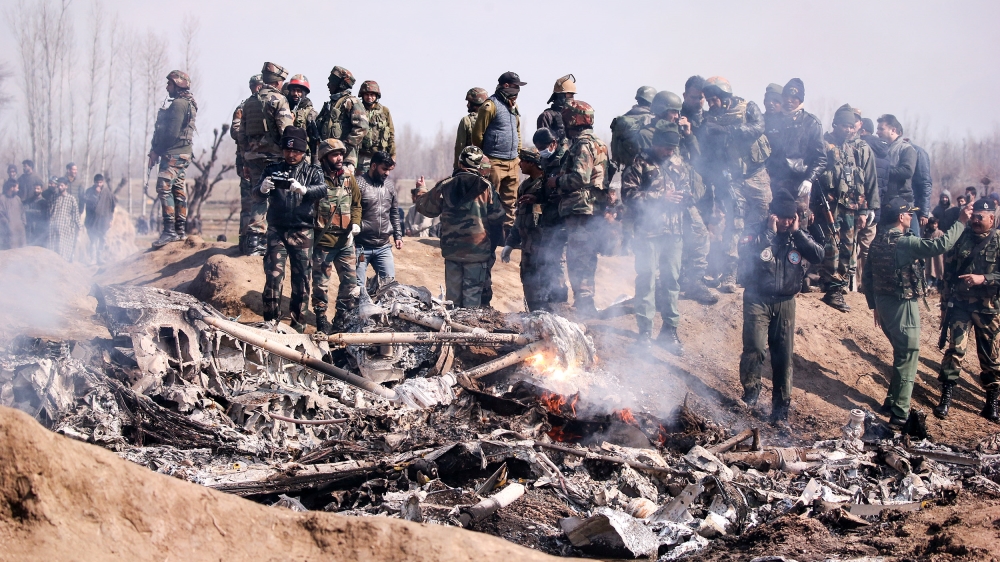