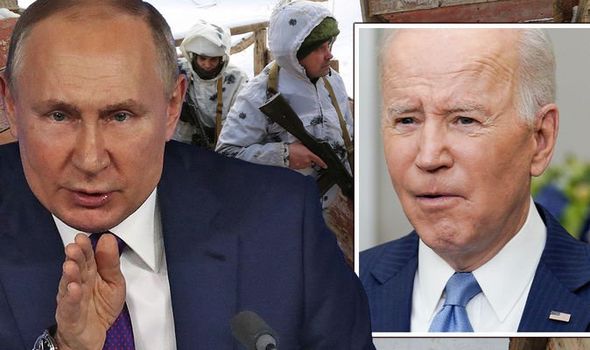 Kyiv could be ‘sacked’ Russian forces may attempt to occupy it, ‘prepare for impact’, Biden said, according to this official.”

According to reports, Mr Biden said Ukraine would not be getting significantly more military help.

He also reiterated that no US troops would be deployed there and nor would there be preemptive sanctions on Russia or any progress with NATO.

However, the warning was not part of a White House readout provided after the call.

The conversation between the two leaders comes at a time when tensions have been running high between Ukraine and Russia as fears of an invasion grow.

Russian President Vladimir Putin has denied any such plans to invade Ukraine.

The White House later issued a statement on the reported call.

It read: “President Biden reaffirmed the readiness of the United States along with its allies and partners to respond decisively if Russia further invades Ukraine. He also underscored the commitment of the United States to Ukraine’s sovereignty and territorial integrity.”

It also noted that the US had provided Ukraine with more than $500 million aid dollars in the last year, and “is exploring additional macroeconomic support to help Ukraine’s economy amidst pressure resulting from Russia’s military build-up”.