The Russian President has blamed damage to the Nord Stream gas supply line on attacks conducted on the orders of “Anglo-Saxon” leaders. Vladimir Putin used his address to the Kremlin on Friday to announce plans to annex four Ukrainian regions which are under illegal occupation by Moscow’s military forces. He went on to denounce suggestions of further Western sanctions against Russia and blamed the recent disruption to the European gas supply on “sabotage” by “Anglo-Saxon” powers.

Speaking from Moscow, President Putin said: “Sanctions were not enough for the Anglo-Saxons: they moved on to sabotage.

“It is hard to believe but it is a fact that they organised the blasts on the Nord Stream international gas pipelines, which run along the bottom of the Baltic Sea.

“In fact, they have begun to destroy the pan-European energy infrastructure. 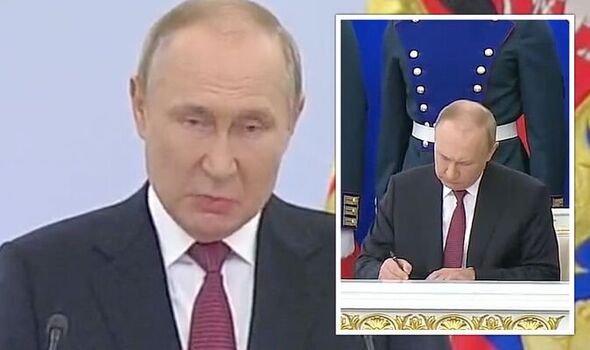 Vladimir Putin added: “There are calls for imposing more and more sanctions on Russia and the leaders of Europe can see to that.

“But, they must realise that when they are deprived of Russian resources and Russian energy, they will suffer a heavy blow to their own industries.

“This is not just being subservient to the United States by Europe, this is a direct betrayal of their own people.

“What we saw recently was a direct diversion and direct attacks on the Nord Stream pipeline.”