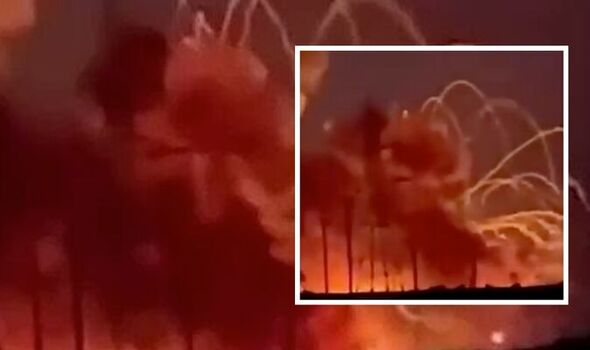 In Crimea – the peninsula Russia seized and annexed in 2014 – explosions were reported near an air base in Belbek, on the southwest coast near Sevastopol, the headquarters of Russia’s Black Sea Fleet. On the opposite end of the peninsula, the sky was also lit up at Kerch near a huge bridge to Russia, with what Putin’s forces said was fire from its air defences.

Inside Russia, two villages were evacuated after explosions at an ammunition dump in Belgorod province, near the Ukrainian border but more than 60 miles from territory controlled by Ukrainian forces.

Kyiv has withheld official comment on incidents in Crimea or inside Russia, while hinting that it was behind them, using long-range weapons or sabotage.

Russian officials said there were no injuries reported in Crimea or Belgorod.

They said they had shot down drones in Belbek and Kerch, and confirmed that they had ordered the evacuation of two villages in Belgorod where they were investigating the cause of a fire.

Former Swedish Prime Minister Carl Bildt posted a video showing huge flames and smoke in the night sky, purportedly at the Russian base in Belbek, saying: “It certainly looks bad – or good – dependent on the perspective.”

Ukraine hopes its apparent new-found ability to hit Russian targets behind the front line can turn the tide in the conflict, disrupting supply lines Moscow needs to support its occupation.

In recent days, it has been issuing warnings to Russians, for whom Crimea has become a popular summer holiday destination, that nowhere on the peninsula is safe as long as it is occupied.

Closer to the front, Kyiv also announced a number of strikes overnight behind Russian lines in southern Kherson province, including at a bridge at the Kakhovska Dam, one of the last routes for Russia to supply thousands of troops on west bank of the Dnipro River.