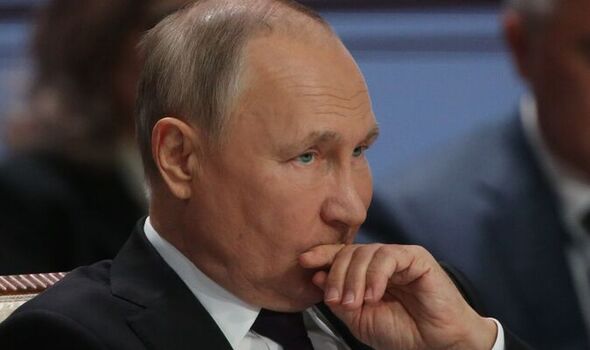 As Ukraine celebrated the aptly entitled Defenders’ Day, a national holiday, the underfire Russian President once again went on the offensive. He said: “The introduction of troops into a direct confrontation with the Russian army is a very dangerous step that could lead to a global catastrophe.

“I hope that those who speak of this have enough sense not to take such steps.”

He also attacked Germany for siding with Nato.

The Kremlin despot said: “Germany must decide what is more important for them – the fulfilment of alliance obligations, as they see it, or their national interests.

“It seems that Germany placed its obligations to the alliance above all. This is a mistake.”

Speaking in Kazakhstan, after a meeting with fellow leaders of ex-Soviet states, Putin, however, appeared to soften his tone over the prospect of nuclear attacks on Ukraine.

As Russia launched further rocket attacks in Kharkiv in the north and Donetsk in the East, the Russian President said: “There is no need now for massive strikes.

“There are other tasks. For now. And then it will be clear.

“We do not set ourselves the task of destroying Ukraine. No, of course not.”

Putin said the military ­mobilisation he ordered was now coming to an end and he had no plans for further conscriptions once it has finished.

He also repeated that Russia was willing to hold talks, although he said they would require ­international mediation if Ukraine was willing to take part.

President Volodymyr Zelensky yesterday thanked his nation for its bravery as Ukraine celebrated Defenders’ Day by announcing that some 600 settlements have now been liberated from Russian control this month alone.

That included 75 in the highly strategic Kherson region. Marking the annual national holiday, he said the invaded nation was continuing to claw back territory from Putin’s retreating troops.

President Zelensky said: “Gratitude to everyone who fought for Ukraine in the past.

“And to everyone who is ­fighting for it now. To all who won then. And to everyone who will definitely win now. Win in such a way that it will crown the struggle of many generations of our people with success. The people who always wanted one thing the most – freedom. For themselves. And for their children.”

Defenders’ Day also prompted a message of support from the US, which stressed it would continue to back Ukraine to the end.

“We will work to bring together the world to maintain pressure on the Kremlin until it ends its brutal, unprovoked war against Ukraine and our shared values.

“And we will stand with Ukraine for as long as it takes.”