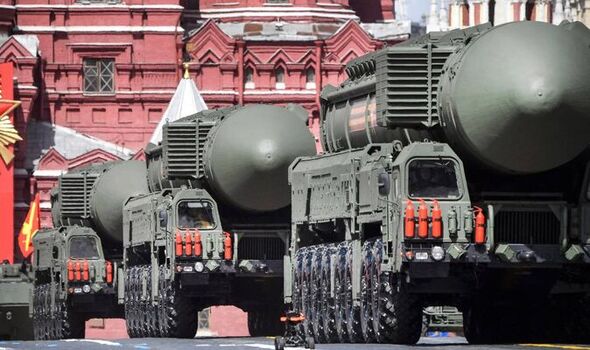 Video posted on Russian social media showed military trucks carrying Iskander ballistic missiles – which can carry nuclear warheads – moving through the country, reportedly on a highway to Vyborg, near the Finnish border.

The apparent deployment came just a day after Finland and Sweden each announced formal plans to apply for membership of Nato.

Russia’s foreign ministry warned yesterday that the move was a ‘grave mistake’ and would have ‘far-reaching consequences’.

Vyborg is located just 30 miles from Finland and 135 miles from Helsinki, putting it well within missile range.

The Iskander is a short-range ballistic missile developed by Russia that went into service in 2006 to replace the Soviet-era Scud and Tochka rockets.

Iskanders are the workhorse of Russia’s missile forces and can perform a wide variety of roles depending on the warhead they are fitted with.

But the most eye-catching of the Iskander’s warheads is a nuclear charge, thought to be around four times as powerful as the bomb that destroyed Hiroshima.

The missiles have a range of up to 300 miles and are most-commonly carried by road-mobile launch vehicles, which makes the missiles much harder to find and destroy.

The new deployment to the Finnish border also comes as Nato began staging a huge drill in Estonia to rehearse its response to an attack from Russia.

Some 15,000 troops from 10 different countries – including Finland, Sweden and a small detachment from Ukraine – will participate in the exercise dubbed ‘Siil’ or ‘Hedgehog’ which will take place just 40 miles from the nearest Russian base.

President Vladimir Putin yesterday said Russia had no issue with Finland and Sweden, but that any Nato expansion of military infrastructure on their territory would demand a reaction from Moscow.

Putin, speaking in Moscow at a summit of the Russian-led Collective Security Treaty Organisation (CSTO), added that Nato’s expansion was a problem for Russia.