The figures, shared by Ukraine’s Centre for Strategic Communications and Information Security, which sits under the country’s Ministry of Culture and Information Policy, represent the only estimation currently available on the state of Moscow’s army. However, information on casualties and hardware losses cannot be verified and, due to governments’ individual interests, not fully trusted.

The Ukrainian government issues regular updates of Russia’s losses in a conflict that has this week hit the four-month mark.

According to its latest update, on Friday, other losses among the Kremlin’s equipment include 3,645 armoured Protected Vehicles (APV), 75 artillery systems, 241 Multiple Launch Rocket Systems (MLRS) and 2,560 vehicles.

Russia has only given an official toll of troops killed on two occasions, the last on March 25, with a figure of 1,351 which experts described at the time as way too low. 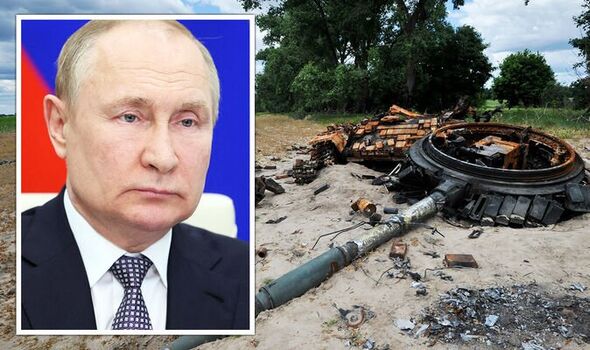 Kyiv reveals no such statistics for its own forces or hardware.

However, President Volodymyr Zelensky said earlier this month his army was losing up to 100 soldiers per day, while some 500 were being wounded.

In an interview with the US Newsmax television channel, Mr Zelenskiy said: “The situation is very difficult: we’re losing 60 to 100 soldiers per day as killed in action and something around 500 people as wounded in action. So we are holding our defensive perimeters.”

Calling Ukraine and its people are the “defensive perimeter” for the world against Vladimir Putin’s aggression, he added: “We have to realise who is the dark power – it’s Russia.

“And Russia is not going to stop in Ukraine, for sure.

“The other countries, the former Republics of USSR and the members of the EU — some of them are already NATO member nations — they’re already under threat.”

During his intervention, on June 1, the Ukrainian leader said the most difficult situation was in the east of the country and the southern provinces of Donetsk and Luhansk, both part of the Donbas region – an “unconditional priority” in Putin’s invasion goals.

More than three weeks later, the area continues to be at the centre of Russia’s focus. 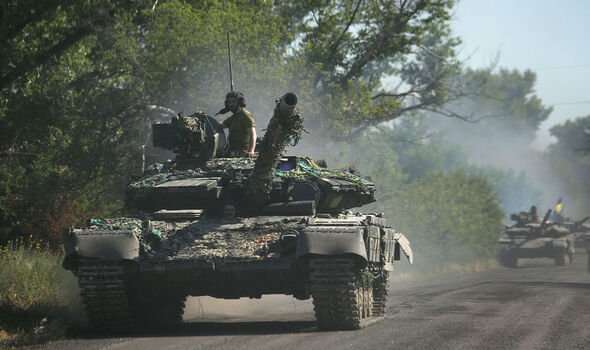 The fall of the city, once home to more than 100,000 people and now reduced to a wasteland of rubble by Russian artillery, is the Kremlin’s biggest win since taking the port of Mariupol last month.

It was the latest symbol of Ukrainian resistance in Donbas but now, Mayor Oleksandr Stryuk said, anyone left behind could no longer reach Ukrainian-held territory, as the area was effectively cut off.

The victory means 95 percent of the Luhansk province is under Russian and local separatist control.

Russians and separatist forces also control about half of Donetsk.

Kyrylo Budanov, head of Defence Intelligence of the Ministry of Defence of Ukraine, described the fall of Severodonetsk as a means for Kyiv’s forces to regroup on higher ground in neighbouring Lysychansk.

He said: “The activities happening in the area of Severodonetsk are a tactical regrouping of our troops.

“This is a withdrawal to advantageous positions to obtain a tactical advantage.”

The head of the military intelligence agency added: “Russia is using the tactic … it used in Mariupol: wiping the city from the face of the earth.”