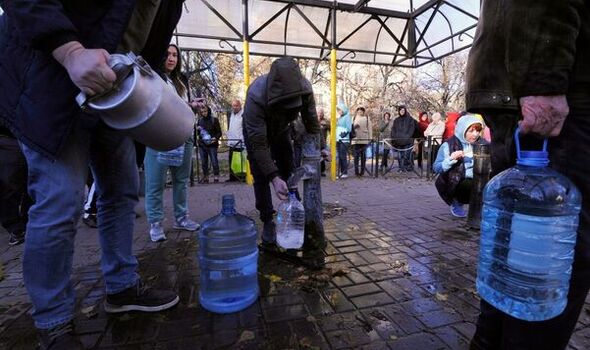 Kyiv mayor Vitali Klitschko said residents should “stock up on water from the nearest pump rooms and points of sale” amid fears of further Russian bombardments.

It came as it was claimed that nearly 1,000 Russian soldiers were killed in one day in Ukraine – marking the deadliest day for Putin since his troops invaded eight months ago.

Ukrainian forces have made gains across Russian-occupied areas, with fighting intensifying in the east and the southern city of Kherson.

Some 950 Kremlin soldiers were killed on Sunday, pushing the Russian death toll up to at least 71,200, Kyiv said.

It was also revealed air defence systems sent by Germany were used to shoot down missiles. Ukraine’s

They included hydroelectric power plants in Kyiv, Kremenchuk, Odesa, Zaporizhzhia and Cherkasy. There were partial blackouts in some areas and emergency shutdowns in others to reduce the load on the system.

Foreign Minister Dmytro Kuleba said that “instead of fighting on the battlefield, Russia fights civilians”.

Meanwhile, Moscow says it has completed its “partial mobilisation”

to boost its ailing military. The Kremlin appeared to stop short of reimposing a grain blockade however, with a large convoy of ships carrying supplies from Odesa yesterday.

It pulled out of a UN-brokered deal in retaliation for a drone attack on warships at the Black Sea port of Sevastopol. Foreign Secretary James Cleverly accused Putin of “exacting vengeance” on Ukrainian civilians and low-income nations around the world for his “military failures”.