Two cruise missiles hit the port with two shot down by air defences in the early hours of yesterday as the war entered its 150th day. 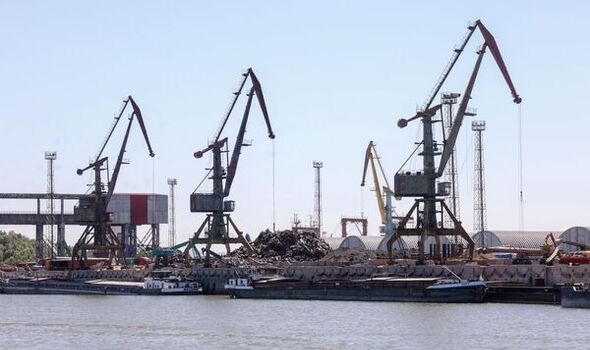 A pumping station was struck and houses around the port set on fire but no significant damage was caused to the harbour, and the grain storage area was not hit, Ukraine’s southern military command said.

On Friday, Kyiv and Moscow reached a landmark deal in Istanbul to allow the resumption of grain exports from ports blockaded since the start of the war.

Under the terms of the deal brokered by the UN and Turkey, Russia had agreed not to target ports while grain shipments were in transit.

Ukrainian President Volodymyr Zelensky said: “This proves only one thing: no matter what Russia says and promises, it will find ways not to implement it.”

Bridget Brink, US’s ambassador, described the attack as “outrageous” and said: “The Kremlin continues to weaponise food. Russia must be held to account.”

Guterres also “unequivocally” condemned the strikes. His spokesman Farhan Haq added: “All parties made clear commitments on the global stage to ensure the safe movement of Ukrainian grain … desperately needed to address the global food crisis and ease the suffering of millions of people around the globe.”

Andriy Yermak, the head of President Zelensky’s office, said: “The Russians are systematically creating a food crisis, doing everything to make people suffer. Famine terror continues. The world must act.”

Foreign Secretary Liz Truss said: “We need to urgently work with our international partners to find a better way of getting the grain out of Ukraine that doesn’t involve Russia and their broken promises.”

Yesterday, Turkey’s defence minister Hulusi Akar said Russian officials told Ankara that Moscow had “nothing to do” with the strikes.

Russia has blockaded Ukrainian ports since the invasion, trapping 20 million of tons of grain.

The resulting shortages have sent food prices soaring and threatened to unleash famine across the globe.

Yesterday, the UK’s Ministry of Defence said heavy fighting was continuing around the southern city of Kherson as Ukraine targeted bridges across the river Dnipro in a bid to cut off Russian supplies.