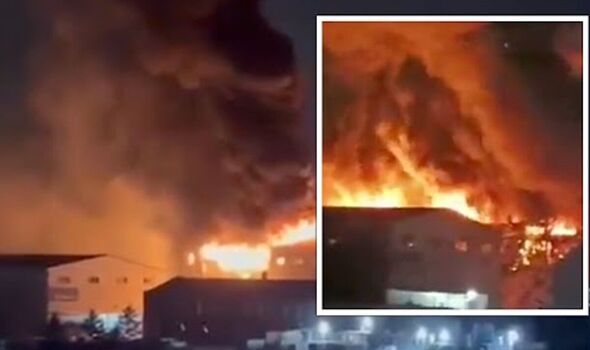 A huge fire has broken out at warehouses in the Far Eastern city of Vladivostok in Russia.

The fire has already spread to more than 1000 square metres.

Flames leaping high into the night’s sky along with plumes of thick black smoke can be seen in video footage of the inferno.

Locals in the area said that the warehouses were believed to be storing confectionary.

The storage areas are located on Kariernaya Street in the city.

There are currently no confirmed report of injuries or fatalities

The fire is the latest in a series of huge fires that have torn through commercial and industrial buildings in Russia.

In Moscow, a fire engulfed the MEGA Khimki mall on December 9 and destroyed an OBI store, as well as killing at least one person.

The fire broke out before dawn and spread rapidly throughout the 18,000 square metres commercial property.

Last week on Monday, a fire on almost the same scale as that in the country’s capital broke out at the Stroy Park shopping centre in Balashikha in the Moscow region.

The fire engulfed 11,000 square metres, according to local media reports.

The cause of the blaze is believed to have been an electrical short circuit.

One security guard was reported injured by the emergency authorities.