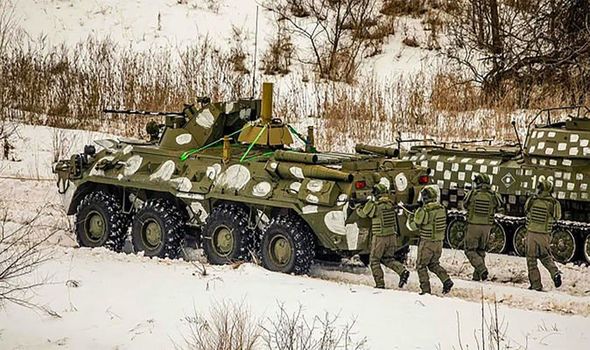 Boris Johnson’s official spokesman said: “The Prime Minister has been clear that any destabilising action by Russia in Ukraine would be a strategic mistake and would have significant consequences.

“I’ve talked about the fact that we’re working closely with our partners, including the US, to draw up a package of sweeping measures to make sure the Russian government is punished if it crosses the line.”

Defence Secretary Ben Wallace could meet his Russian counterpart as Western nations seek a diplomatic resolution to the Ukraine crisis.

A senior source said: “The Defence Secretary is glad that Russia has accepted the invitation to talk with his counterpart.

“Given the last defence bilateral between our two countries took place in London in 2013, Russian Defence Minister Sergei Shoigu has offered to meet in Moscow instead.”

Meanwhile, the US Secretary of State Antony Blinken held talks with his Russian counterpart Sergei Lavrov in Geneva yesterday, aimed at defusing the situation. Mr Blinken said the US was engaged on a path of diplomacy but had also embarked on one of defence and deterrence.

He said: “We’ve been clear – if any Russian military forces move across Ukraine’s border, that’s a renewed invasion. It will be met with swift, severe and a united response from the United States and our partners and allies.”

However, he hinted at a possible meeting between US leader Joe Biden and Russia’s Mr Putin, saying: “President Biden met here in Geneva with President Putin, he’s spoken to him on the phone or via video conference on a number of occasions, and if we conclude and the Russians conclude that the best way to resolve things is through a further conversation between them, we’re certainly prepared to do that.”

Mr Lavrov said he expected the US to present a written response to Russia’s security demands next week.The list includes a pledge from Nato never to admit Ukraine.

He said he hoped “emotions will decrease” after the “frank” talks. But Deputy Foreign Minister Sergei Ryabkov told CBS News: “We’re not afraid of anyone, not even the US.”

Tensions over Ukraine have increased significantly in recent months, with reports suggesting more than 100,000 Russian troops with tanks and missiles are massed near the border. Experts fear Mr Putin is on the brink of ordering a full-scale invasion.

In addition, Russia is sending two battalions of S-400 surface-to-air missile systems to Belarus next month to join in military exercises, the Interfax news agency reported.

Russia denies planning to invade but a statement by Ukrainian military intelligence officials suggested that as well as sending mercenaries to the east of the country, Russia has also secretly taken fuel, several tanks, artillery and mortars there.

Much is being made of Russia’s military build-up close to its border with Ukraine, especially given widespread predictions of an imminent invasion.

However, while such an outcome appears likely – albeit not guaranteed – it’s important to put the situation into context.

Ukraine borders Russia’s southern military district. So when figures suggest there are 100,000- plus troops on Ukraine’s border, a significant proportion of them are already there.

What is interesting is what seems to have been added, is what we call battalion tactical groups.

Within each regiment, notionally within each Russian regiment formation, if you have three battalions, two of them will be staffed with professional soldiers and the other is filled with conscripts.

One of those two battalions is held at a very high readiness level, and that battalion tactical group would have 500 to 600 men in it, armoured vehicles, tanks, artillery, it may have remotely piloted vehicles for intelligence and it will have its own communications network. It has everything it needs to go at very short notice and fight for two to three days.

So what we are seeing move to Ukraine are battalion tactical groups from all over Russia.

And that is what is interesting, because they are pulling them from everywhere. It was originally just very high-profile units like the first Guards Tank Army, which is typically based outside Moscow.

They’re now moving units from the Far East, Siberia, the Pacific Fleet and showing how serious they are about this situation with the types of units that they’re bringing in.

In other words, it’s not just a show of force. If the decision is made to step across the border in force, they’re ready to do it.

At the moment these forces are about 125 miles from the border, so it would take them a day or two to get to a point where they can fight a very serious battle.

If Putin green-lights military action, what happens next depends on what kind of message Russia is trying to send.

He may opt for long-range cruise missile strikes. Russia’s got the Caspian flotilla, the Black Sea Fleet, long-range aviation, so there are multiple kinetic assets they could use to inflict damage.

The tricky thing is they don’t have economic tools for coercion, or bribery or however you want to think of it – they really only have the military tool.

They would maybe look to smash the Ukrainian forces very hard, early on and send a message.

However, while nobody’s in any doubt of what the outcome would be, Ukraine would inflict serious casualties. It will be a bloody conflict, purely because the Ukrainians are ready for it.