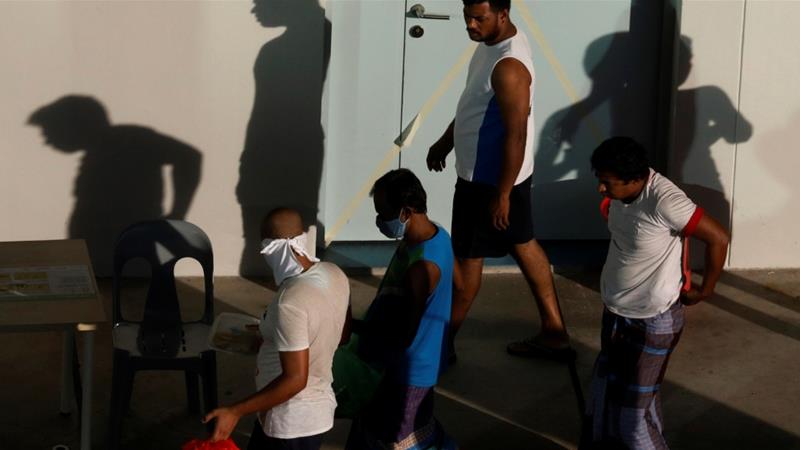 Singapore – Two weeks into Singapore’s lockdown, the city-state’s coronavirus cases continue to rise, prompting the government to extend its order limiting movement among residents until June 1.

On Tuesday, just before Prime Minister Lee Hsien Loong announced the extension of the order for people to hunker down at home, Singapore reported 1,111 new cases, most of them among migrants, who work in low-wage jobs and usually live in crowded, airless dormitories on the outskirts of the wealthy Asian city.

At least 1,016 more cases were reported on Wednesday, bringing the total to 10,141. The number of deaths, however, have been kept low at 11.

“For the migrant worker population who has been so invisible for so long, I think that was an obvious blind spot,” Chong Ja Ian, an associate professor of political science at the National University of Singapore, told Al Jazeera.

Chong said since the deadly infection – known as COVID-19 – first emerged in Singapore, not-for-profit groups, such as TWC2 and HOME, have made noise about the threat of the disease on migrant workers, but their complaints were dismissed.

“[They] were seen as troublemakers, or raising unnecessary worries, scaring people. If more seriousness were taken to these worries maybe the situation would have been different. I don’t know how we will get out of this.”

The modern skyscrapers and luxurious hotels of Singapore were built by the city’s more than one million workers.

But while the government won plaudits from the World Health Organization (WHO) for the diligent contact tracing and comprehensive quarantine measures, which kept daily numbers at a minimum early in the outbreak, they have not paid enough attention to the country’s migrant labourers.

“It is not that there were no warnings, it was more that there was a limit to the cognitive bandwidth of attention,” said Jeremy Lim, an adjunct associate professor at the National University of Singapore’s Saw Swee Hock School of Public Health.

Singapore adopted a calibrated approach in response to the pandemic, imposing new restrictions, from quarantining incoming travellers to requiring social distancing in public places, and banning non-residents from the country.

With the help of the police, a team also tracked and traced contacts of people diagnosed with COVID-19. 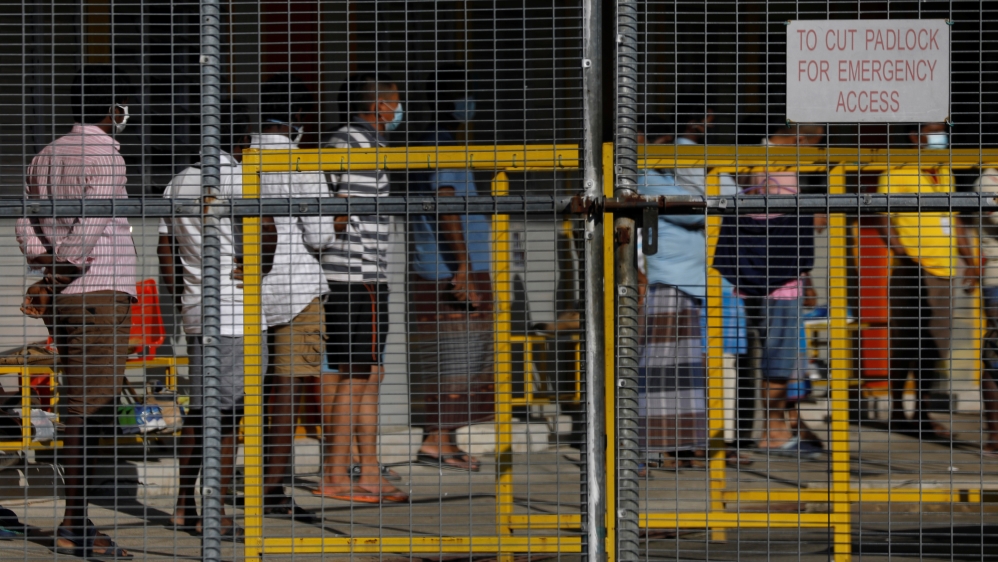 Imported cases made up a significant percentage of daily case numbers throughout March – a time when people in Singapore were still able to dine out and socialise even as many Western countries shut down.

Professor Teo Yik Ying, dean of the National University of Singapore’s Saw Swee Hock School of Public Health, believes Singaporeans living abroad who rushed home before the government-mandated quarantine went into effect, likely passed on the virus at home and in the wider community.

“Clearly the measures that Singapore adopted to contain the first wave needed to be enhanced and supplemented to handle the second wave, he said.

Asked how the virus might have been transmitted from Singapore’s travellers and imported cases to the migrant workers, who now make up the vast majority of cases, NUS’s Lim noted that in their roles as cleaners and labourers, the workers could have been exposed in the community in the same way as anyone else.

Lim said the district of Little India, where many workers like to spend their free time, is also popular with tourists and other Singapore residents, particularly Mustafa Centre, the buzzing 24-hour shopping mall that is renowned for its competitive prices.

In a blog post on April 20, TWC2, one of the groups advocating for migrants, said COVID-19 cases were increasing at an average of 23 percent a day in quarantined dorms and 64 percent for non-quarantined dorms, meaning the number of cases is effectively doubled every day and a half.

The 2,922 Bangladeshis with the virus in Singapore as of April 21, were roughly the same as the number of infections in all of Bangladesh at 2,948.

But the challenge Singapore now faces also reflects residents’ own decisions as the coronavirus spread throughout the world.

Many continued to crowd wet markets, street stalls and public transport. They flocked to beaches, prompting authorities to close them a day later. On the first day of the circuit breaker, Singaporeans flouted safe distancing rules more than 7,000 times, according to government data.

It did not help that politicians from the ruling People’s Action Party (PAP), were seen “walking the ground” to engage with their constituents even after the lockdown began.

“Some of the mixed messages that are coming from the political leadership [were] creating some confusion about social distancing as well,” Chong said.

“It’s not surprising that people in Singapore who tend to take their cues from authority may read things as they don’t need to take social distancing as seriously as they ought to.”

Fighting the virus on two fronts

Experts say Taiwan and Hong Kong have been relatively more successful in containing the virus because citizens themselves put pressure on their governments to act and decided on their own to wear masks, stop going out and keep a distance from others.

Just before the circuit-breaker came into force, the Singapore government said it was fighting the virus at home on two separate fronts, one for the general population and one for migrant workers in dormitories who were told they could no longer leave their accommodation once the lockdown started. 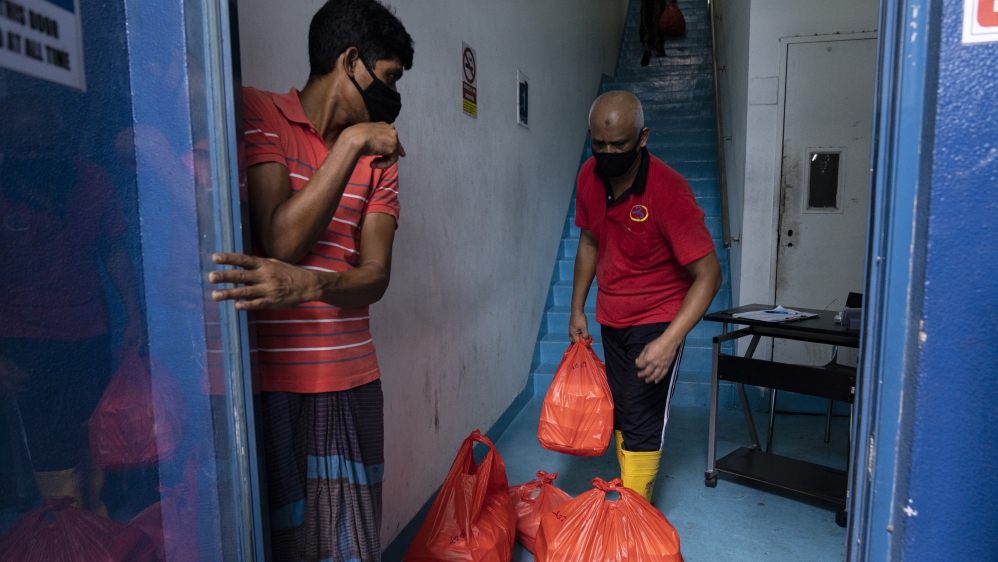 Minister of State for Manpower Zaqy Mohamad told Parliament on April 7 that conditions at a foreign workers’ dormitory – the place identified as having the most cases in Singapore and then isolated – could have been better maintained when it was turned into an isolation area.

“You can’t have everybody 80 percent practising social distancing and 20 percent not practising that,” Cyrus Shahpar, a former official of US Centers for Disease Control and Prevention (CDC) and director of Resolve to Save Lives, a nonprofit that combats global pandemics, told Al Jazeera.

“There’s no national containment strategy because they will continue to grow and affect the population.”

Chong says the approach of separating “community” and “dormitory” cases might have lulled Singaporeans into a false sense of security, thinking they would never come into contact with a migrant worker so could not possibly be at risk.

Singaporeans would tend to think, “because I am clean and I do things right, this won’t happen to me”, Chong said.

The men who built modern Singapore work long hours and live in cramped conditions, but the coronavirus is showing they do not live in isolation.

“We all live together in the same community … we are not safe until everybody is safe,” Chong said.