Tanzania receives first shipment of herbal concoction that Madagascar claims cures COVID-19, but WHO has misgivings. 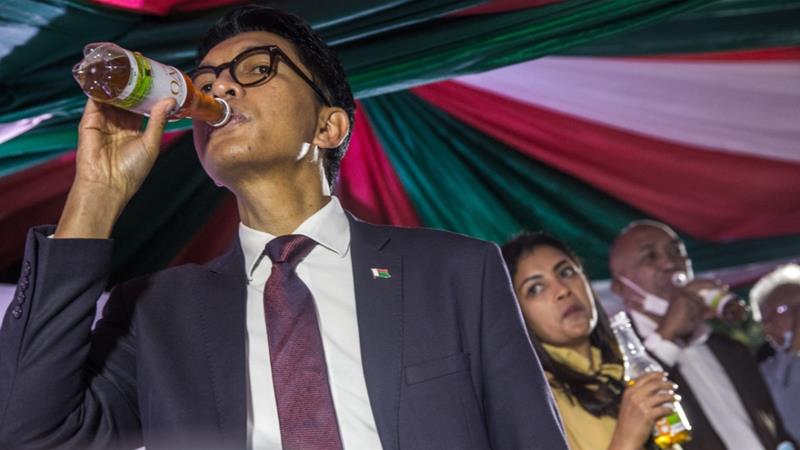 Tanzania says it has received its first shipment of Madagascar’s self-proclaimed, plant-based “cure” for coronavirus, despite warnings from the World Health Organization that its efficacy is unproven.

The announcement on Friday came days after Madagascar said it would begin selling the herbal concoction – known as Covid-Organics – and that several African countries had already put in orders.

The purported remedy is a drink derived from artemisia – a plant with proven efficacy in malaria treatment – and other indigenous herbs.

Last month, Madagascar’s President Andry Rajoelina launched the remedy at a news conference, drinking from a sleekly-branded bottle filled with an amber liquid which he said had already cured two people.

Madagascar has since been giving away thousands of bottles of the product, developed by the state-run Malagasy Institute of Applied Research, to countries across Africa.

Earlier this week, the East African island nation told the Reuters news agency it would begin selling the drink, which domestically can be bought for around 40 US cents per bottle.

Guinea-Bissau has received more than 16,000 doses which it is distributing to the 14 other African nations.

Liberia’s Deputy Information Minister Eugene Farghon said this week there was no plan to test the remedy before distribution.

“It will be used by Liberians and will be used on Liberians,” he said, noting that the WHO had not tested other popular local remedies.

“Madagascar is an African country … Therefore we will proceed as an African nation and will continue to use our African herbs.”

But the WHO has warned against “adopting a product that has not been taken through tests to see its efficacy”.

Isolated compounds extracted from artemisia are effective in malaria drugs, the WHO noted, but the plant itself cannot treat malaria.

The Africa Centres for Disease Control and Prevention also said the drink should be “tested rigorously”.

Health specialists are worried that people who drink the product might feel they are immune to COVID-19 and engage in risky behaviour, the WHO’s Africa head Matshidiso Moeti said.

“We are concerned that touting this product as a preventive measure might then make people feel safe,” she said.

The African Union (AU) on Monday said it was trying to get Madagascar’s technical data on the remedy, and would pass that to the Africa CDC for evaluation.

“This review will be based on global technical and ethical norms to garner the necessary scientific evidence,” the AU said.

Meanwhile, Tanzanian President John Magufuli has come under fire for repeatedly playing down the gravity of the coronavirus pandemic.

After Magufuli on April 22 accused the health ministry of stoking panic by releasing new figures, the country has only updated its numbers once, on April 29, at which date it had recorded 480 cases.

Health Minister Ummy Mwalimu on Friday said the government would resume giving regular updates in a few days after completing improvements to the country’s laboratory infrastructure.

“Coronavirus is there and it will continue for a couple of months. We have patients and others are dying,” Mwalimu said. “We need to learn how to live with it by taking precautionary measures.”