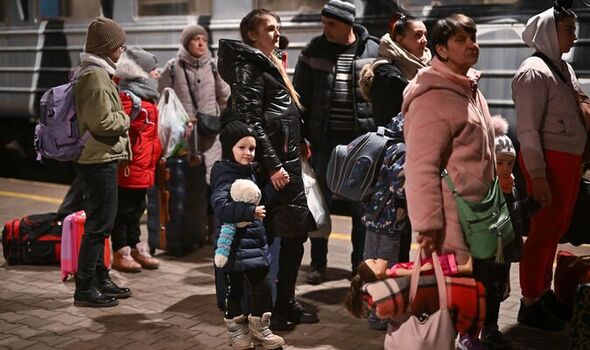 Filippo Grandi, UN High Commissioner for Refugees, tweeted: “Among the responsibilities of those who wage war, everywhere in the world, is the suffering inflicted on civilians who are forced to flee their homes. “The war in Ukraine is so devastating that 10 million have fled – either displaced inside the country, or as refugees abroad.” The UNHCR – the United Nations refugee agency – puts the total number of to have escaped across the country’s borders since Russia invaded on February 24 at 3,389,044.

A further 60,352 joined the exodus since Saturday, a similar number to the day before.

Roughly 90 percent of those who have fled the country are women and children, as Ukrainian men aged 18 to 60 are eligible for military service and therefore unable to leave the country.

Boris Johnson confirmed yesterday that government grace-and-favour homes could be opened up to Ukrainian refugees.

The Prime Minister and wife Carrie, who live in the flat above No 11 Downing Street, do not plan to open up their living quarters. Mr Johnson said he does not own “the homes I live in” and officials noted that security issues may arise from the arrangement.

But the premier did not rule out making the Government’s grace-and-favour homes available, telling reporters: “I am very happy for those that are responsible to look into it.”

Mr Johnson also urged China to join in the global condemnation of Putin’s invasion of Ukraine.

The Prime Minister said he believed some in Xi Jinping’s administration were now having “second thoughts” about their stance – despite the fact there was fresh criticism of Nato on Saturday from China.

Mr Johnson added: “As the number of Russian atrocities mounts up, I think it becomes steadily more difficult and politically embarrassing for people either actively or passively to condone Putin’s invasion. There are considerable dilemmas now for people who thought they could sit this one out, sit on the fence.”

Yesterday officials in central Europe said they feared it would soon be impossible to comfortably house the vast numbers of people who have fled Ukraine, who are currently in temporary accommodation in other states.

Most of the Ukrainians have arrived at border points in Poland, Slovakia, Romania and Hungary, UNHCR data shows.

Commenting on the fact that more than 150,000 people have registered their interest in hosting refugees under the Government’s sponsorship scheme, Mr Johnson said: “What the British public are doing I think is incredible. It is amazing and I think that it will be a great experience and that both the families that take them in and the evacuees themselves will benefit.”

Czech Interior Minister Vit Rakusan said the government would seek to extend a state of emergency to deal with the influx, with officials trying to relocate new arrivals to cities outside Prague to ease the pressure. He said: “The Czech Republic is balancing on the edge of capacities where we are able to provide comfortable living conditions.

“Living in gyms, sleeping bags, or campsites is not good for life.”

The Czech parliament also approved three laws this week to expand schools’ class capacities and make it easier for Ukrainians to access work and health insurance.

Meanwhile in Poland, whose Ukrainian community of around 1.5 million is the EU’s largest, refugees queued for a third day in front of the National Stadium which is being used as an administration office for refugees.

Officials say Polish capital Warsaw’s 1.8 million population has gone up by 17 percent because of the arrivals.

City council spokeswoman Monika Beuth-Lutyk said: “We have done everything we can and the next move is up to the government to implement a system and to build refugee towns.”

At the Medyka crossing, Poland’s busiest point along the country’s 310-mile border with Ukraine, aid groups were preparing for a surge of refugees let through by the new humanitarian corridors yesterday.

An International Organisation for Migration spokesman said: “We don’t know how many people will arrive or when.”