Home » World News » The Most Exciting Part of Dining Out Is … the Bathroom?

A discothèque, a shrine to Dolly Parton, an ode to Iranian films: These are just a few of the eye-popping, eccentric restaurant restrooms giving diners a different kind of thrill.

Mad, in Houston, is one of several restaurants in the country drawing as much interest from diners for the bathroom as for the food.Credit…A. Scott for The New York Times

Behind an unmarked door at Wenwen, a homey Taiwanese restaurant in Brooklyn, a discothèque awaits: Speakers pump out pop songs in Mandarin, Cantonese and Taiwanese. Strobe lights dance across the walls. A disco ball twirls above. A framed poster of the Taiwanese pop star Feng Fei-fei hangs directly opposite the toilet.

This clubby oasis in Greenpoint is actually a bathroom. But the music, the neon and the long line to get in could make you think otherwise. Diners post selfies from inside the room more often than they post about the food, said an owner, Eric Sze.

“I don't know if restaurant bathrooms will ever be the reason you go to a restaurant, and they probably shouldn’t be,” Mr. Sze said. “But I think the bathroom can and should and will be one of the reasons why you love going to this restaurant.” 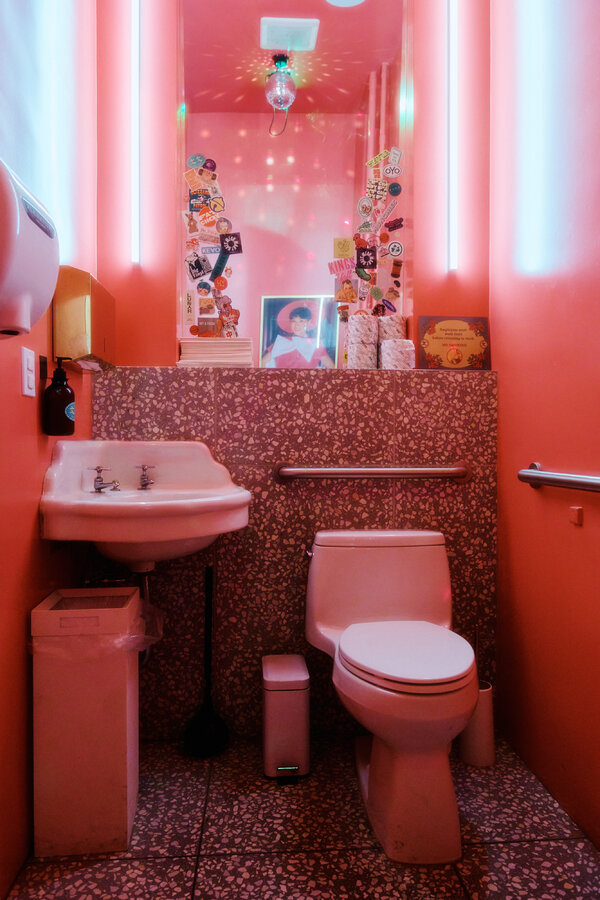 Restaurant bathrooms come in many forms. Some are unadorned, poorly lit and even grimy. Others are lovingly supplied and carefully appointed, with Aesop hand soap, D.S. & Durga candles or the eye-catching, seemingly omnipresent flamingo wallpaper. Still others try to liven up a routine visit with quaint adornments like a joke plaque or bumper stickers.

But then there are bathrooms that go far beyond simple comfort or comedy to make a bold statement about the restaurant’s identity — often delighting and intriguing customers as much as the food does.

Mr. Sze described Wenwen’s restroom as “a little Narnia door” into his mind: While growing up in Taiwan, he sang these songs in karaoke rooms.

At Gracie’s Ice Cream and Earnest Drinks in Cambridge, Mass., 53 Dolly Parton photos and album covers and 18 commissioned portraits of the singer cover the walls. Her greatest hits play on a loop.

What does Dolly Parton have to do with ice cream? Both make people happy, said Aaron Cohen, an owner, and Ms. Parton “is just like a saint.”

Most customers, he pointed out, don’t expect much from a restaurant bathroom. “It is an easy opportunity to surprise people.”

He tried to keep that surprise under wraps at first, but someone created a Google Maps entry for the “Dolly Parton chamber.” (All five reviewers awarded it five stars.)

A better-kept secret are the bathrooms at Sofreh, an Iranian restaurant in Prospect Heights, Brooklyn. While the dining room décor is fairly minimalist, one restroom is covered almost entirely in vintage Iranian film posters. In the other, clips from some of those movies are projected on the wall.

Before opening Sofreh in 2018, Nasim Alikhani, the chef and co-owner, noticed that restaurant bathrooms in New York “were nicely done, good hardware, amazing tiles,” but they weren’t fun, she said.

She wanted hers to be not only fun, but educational. The movies she shows were banned after the Iranian Revolution in 1979 for their Western influences.

“My whole job with the place is not just serving Iranian food,” she said. “I am there presenting the culture, the music.”

Statement bathrooms are hardly a new thing in dining. Mission Chinese Food, Danny Bowien’s genre-bending restaurant in downtown Manhattan, opened in 2014 with a “Twin Peaks” bathroom featuring the TV series’ spooky theme music and a portrait of the character Laura Palmer. (Like Ms. Palmer, the restaurant has departed.) Canlis, a fine-dining restaurant in Seattle that has been open for several decades, has a bathroom that evokes a Japanese Zen garden, with stone floors and bamboo.

That kind of creativity has become more commonplace in recent years, said Thomas Kemeny, a freelance creative director in Austin, Texas, who has photographed restaurant bathrooms for an online art series titled “Excuse Me, Here’s the Bathroom.”

“I think they show a bit more of their personality than they used to,” he said. “There is more ownership of the whole space of the restaurant.”

Diners are also paying closer attention. The bathroom selfie is edging out the overhead shot of that plate of pasta, said Joe Romano, a software engineer at Meta in New York, who runs an Instagram page where he reviews restaurant bathrooms: @peebeforeyouleave.

“Taking pictures of the food is so overdone,” Mr. Romano said. “You don’t want to seem like a TikToker taking pictures of every course or dish. But when you go to the bathroom, no one is judging you. You can escape.”

He added, “It is almost like a spa away from the restaurant.”

Or a circus fun house. At Mad, a Spanish restaurant in Houston that opened in 2019, the bathroom walls and ceilings are covered with mirrored panels, punctuated by neon LED lights that change color. The design is inspired by the contemporary aesthetic of many Madrid restaurants, said Remington Bruce, the director of operations.

Most customers just want the selfie. Some “have one drink and a tapa and take a photo in the bathroom and leave,” Mr. Bruce said.

In some cases, the bathroom is used to subvert expectations about a restaurant.

The restrooms at la Barbecue, in Austin, sport colorful murals by the artists Zuzu Perkal and Xavier Schipani. One is Studio 54-themed and has drawings of clubgoers, a disco ball and a neon sign that glows with the word “Fantasy”; the other has photographs scribbled with spray paint, a large pair of sunglasses hanging above the door and a hip-hop playlist.

“I wanted la Barbecue to feel different than other barbecue places,” said LeAnn Mueller, an artist and co-owner of the restaurant, which opened last year in its current location. “I didn’t want it to be like your normal, you’ve got a dissected pig, a dissected cow on the wall, a beer sign. I wanted it to be very art-forward.”

The bathroom “is a place where you can express another side of how you want the story of your restaurant to be told,” she said.

At Wolfpeach in Camden, Maine, which opened last year, the eccentric bathroom feels at odds with the high-end fare, like duck with braised leeks. There’s a 1990s club-music playlist, dark-green walls, a single hanging light bulb and a changing array of objects, like a deer horn bedazzled with pearls and crystals by the artist Olivia Vanner. Six candles line the base of the walls, “like it’s a ceremonial room,” said Gabriela Acero, an owner.

When a dining room is impeccably decorated but the bathroom is spare, she said, “it takes you out of the magic of being out to dinner.”

The bathroom at Wolfpeach aims to maintain that magic, while telegraphing that this isn’t “precious fine dining,” Ms. Acero said.

It’s a place for people, including herself, to reset and let loose in private, she added. “I go to that bathroom and twirl around for five seconds a couple times a shift.”

But putting a personal touch on a bathroom can get expensive. Sean Spurlock, a founder of Two Cities Pizza (serving New York- and Chicago-style pizzas in Mason, Ohio, and Suwanee, Ga.) said he spent about $30,000 to make the bathroom in the Ohio location look like a New York City subway car. It has subway maps, fake advertisements, hanging handles and even a speaker announcing that the doors are closing.

Customers love the look, he said. “If it had cost double, we would still do it.”

Yet at Pinyon, a pizza restaurant in Ojai, Calif., Jeremy Alben and Tony Montagnaro, two of the owners, said it cost only around $500 to give their bathroom a psychedelic makeover. The décor includes frog posters, black lights, a mushroom lamp and a speaker playing frog chirps.

Many new restaurants in Ojai spend lavishly on a common aesthetic of “all neutral wood tones and one-color accent walls,” Montagnaro said.

Their priority when starting Pinyon in 2021 was originality.

“Do you need to have all this excess and exorbitance spent on making a bathroom experience fun and exciting?” Montagnaro said.

No matter the number of high-end fixtures, restrooms will always serve a very basic purpose.