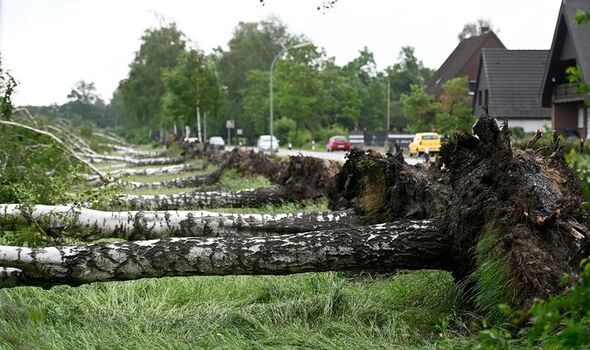 Winds of up to 81mph ripped through western Germany, toppling trees, tearing roofs from buildings and sending flying debris smashing into cars. The German Weather Service confirmed three tornadoes in North Rhine-Westphalia state: in Paderborn, in nearby Lippstadt and on the edge of the town of Hoexter.

Forty-three people were injured – 13 of them seriously – in Paderborn as the tornado tore across the city’s central area on Friday afternoon, according to Mayor Michael Dreier.

He added that trees and traffic lights had “snapped like matches” as the storm left a roughly 980ftwide wake of destruction.

In Lippstadt, a church steeple was toppled and it was reported that more than 100 people were temporarily trapped in a local open air pool after fallen trees blocked the exit.

Elsewhere, a 38-year-old man died in the town of Wittgert after suffering an electric shock in a flooded cellar.

Further south, authorities in Bavaria said 14 people were injured on Friday when the wooden hut they were trying to shelter in collapsed during a storm at Lake Brombach, south of Nuremberg.

Storms started battering the country on Thursday, disrupting transport, as well as flooding hundreds of basements.

Police said two French citizens died after their motorised paraglider was caught by a strong gust of wind shortly after taking off from an airfield in Ballenstedt, 109 miles south-west of Berlin.

Meanwhile, Spain was sweltering under unusually high temperatures for May, with hot, dry air carrying dust from north Africa. The mercury rocketed to 108F (42.3C) on Friday afternoon in Andujar, in Andalucia. Cordoba and Sevilla had similar temperatures.

At least 13 regions were on alert yesterday due to the heat, Spain’s State Meteorological Agency AEMET said. On Wednesday, southern France also had record-breaking monthly temperatures of 96.4F (35.8C).

In the US, a twister in Michigan left two dead and 44 injured after it hit the small city of Gaylord, 230 miles north-west of Detroit. Car repair shop owner Mike Klepadlo, said: “I’m lucky I’m alive. It blew the back off the building.”

One of the Michigan fatalities, a person in their 70s, was killed when the trailer park they lived in was destroyed by the freak storm.

Mayor Todd Sharrard added: “I’ve never seen anything like this in my life. I’m numb.”

Earlier in the week Uruguay and Brazil were hit by Cyclone Yakecan, leaving at least two dead. Winds of 61mph gusted through Uruguay’s capital, Montevideo, and at least 200,000 properties were left without power in Brazil.

Get the latest three-day weather forecast where you live. Find out by adding your postcode or visit InYourArea

Thankfully, we’ve had a lucky escape and Brits can relax…

Cloudy weather was forecast today across much of Britain, with showers in Scotland and Northern Ireland.

Sunny spells are expected in the South East with highs of 73F (23C), and outbreaks of rain in the Midlands and the North.

Tomorrow is set to be another “cloudy and unsettled” day, with rain in eastern and southern areas, according to MeteoGroup.

Eastern areas are forecast a wet start to Tuesday, before a mostly dry day with sunny spells.

The Met Office has also forecast “blood rain” – caused by high concentrations of red dust in the atmosphere – in parts of the country during the early part of the week.