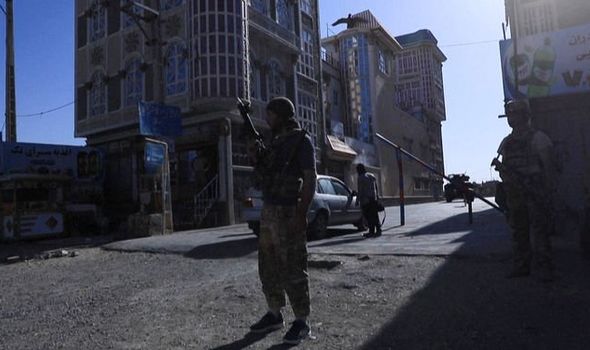 The insurgents are closing in on the capital Kabul as they attempt to seize power.

Around 600 British paratroopers will be deployed for the rescue mission.

Most embassy staff, other British nationals and Afghans who have been granted refuge in Britain are among up to 4,000 people who will be evacuated to the UK in an operation starting at the weekend.

Defence Secretary Ben Wallace said: “I have authorised the deployment of additional military personnel to support the diplomatic presence in Kabul, assist British nationals to leave the country and support the relocation of former Afghan staff who risked their lives serving alongside us.

“The security of British nationals, British military personnel and former Afghan staff is our first priority. We must do everything we can to ensure their safety.”

Taliban militants yesterday seized control of Herat, the third-largest city in the country, and a strategic provincial capital near Kabul, prompting fears an attack on the capital is imminent.

The Ministry of Defence said the additional deployment of 600 troops — from the 16 Air Assault Brigade and Joint Force Headquarters — was “in light of the increasing violence and rapidly deteriorating security environment in the country”.

Defence chiefs expect the operation to be completed by the end of the month.

The British embassy in Kabul’s heavily fortified “green zone” will be moved to a “more safe” location.

The British Government insisted the evacuation and its timing has been long planned.

But Afghan officials say it was brought forward as the security situation has become more desperate. The US has also announced that it is deploying some 3,000 additional troops to help the departure of its embassy staff.

Meanwhile, the head of the British military described the situation in Afghanistan as a “humanitarian tragedy”.

General Sir Nick Carter, the chief of the Defence Staff, revealed there are “women being brutalised”, executions in the street and forced marriages to Taliban fighters.

He admitted Al-Qaeda terrorists are fighting alongside Taliban militants, with thousands of innocent civilians fleeing brutality across the country.

Gen Carter said: “I think we have already got a humanitarian tragedy. The question now is whether it gets worse or not.

“If we end up with a scenario where the state fractures, and you end up essentially with a security vacuum, then there are absolutely ideal conditions for international terrorism and extremism to prosper yet again.

“All the sorts of things that the Taliban were notorious for in the past.”

Britain and the US have opted for the worst of both worlds in Afghanistan.

We are neither in nor out, and we are now seeing the grim consequences of this nonstrategy play out.

Simply providing air cover and strategic advice as well as calling on the Afghan military to fight harder is not enough to stem the advance of the Taliban as it sweeps across the country.

Yet however appalling it might be to watch progress made over decades wiped out in a matter of days, this is only the start.

For whatever words come out of their mouths, the Taliban have not changed. They retain deep ties to Islamist extremism groups and share their hatred of our free, Western way of life.

If the Taliban weren’t emboldened by their battlefield gains, they certainly will be by the words coming out of our leaders’ mouths and the apparent acceptance of defeat.

The desire to bring our troops home and “No More Forever Wars” after such a long-term commitment in Afghanistan is hugely appealing.

But we must understand the consequences.

It takes decades — generations — to build a free society from nothing, with all the institutions, leaders, educated population and infrastructure necessary to support it. It takes just as long to build, train and equip a skilled, dedicated military capable of protecting it.

You can’t simply expect to pull out overnight and negotiate an acceptable deal with the Taliban as they take control of province after province.

You don’t win at the conference table what you have lost on the battlefield.

We should be asking whether staying on the ground and withdrawing gradually over a much longer timeframe was truly unaffordable, given the alternative.

Because the costs — financially and otherwise — of the actions we are taking instead will be very real, both for Afghans and for us. What we can expect to see is the nation that brought us 9/11 and 7/7 descend back into a terror state.

A generation of hope will be wiped out. Those who helped create a moderate society — the civil servants, political leaders, academics and writers — will either flee or be killed.

These are the very people upon whom a stable, free future depended, who grew up and were educated under the protection of Western allies.

Now we have abandoned them to their fate, it seems only a matter of time before the Taliban control the whole of the country and they fall under the shadow of strict Sharia law.

Yet even if they are stopped at the gates of Kabul, they now rule vast swathes of the country.

According to a UN Security Council report in June, the Taliban remains “closely aligned” with al-Qaeda.

Members of al-Qaeda have reportedly been relocated to more remote areas by the Taliban to avoid exposure and air targeting.

Support for the terrorists will only increase after foreign troops withdraw.

We can expect the country to once more become a breeding ground for extremist ideas, and a training ground for militants looking to export terror.

The people of Afghanistan are experiencing the bloody aftermath of this withdrawal, thousands of miles away.

But the Taliban and its support for extremism will inevitably eventually reach the streets of Britain.