Trump has previously said he would need to meet Xi to seal a final trade deal. 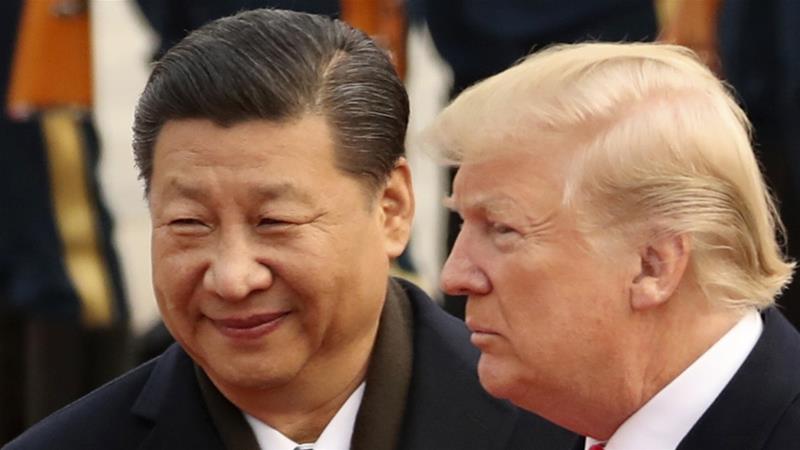 There are no plans yet for US President Donald Trump and his Chinese counterpart Xi Jinping to meet soon in hope of finalising a trade deal, the former has said.

On Thursday, asked by a reporter whether there would be a meeting before a March 1 deadline for the two countries to reach a trade deal, Trump said: “No.”

When asked whether there would be a meeting in the next month or so, Trump said: “Not yet. Maybe.”

The remarks confirmed comments from administration officials who said the two men were unlikely to meet before the deadline, dampening hopes of a quick trade pact and sparking a drop in the US stock markets.

Trump has said previously he would need to meet with Xi to seal a final deal.

The countries had taken a 90-day hiatus in their trade war to hammer out a deal, and another round of talks is scheduled for next week in China.

Earlier on Thursday, White House economic adviser Larry Kudlow indicated that it was unlikely that the two leaders would meet before the deadline, but they could still hold talks later.

“At some point, the two presidents will meet, that is what Mr Trump has been saying. But that is off in the distance still, at the moment,” he told reporters.

Secretary Steven Mnuchin added that “there’s nothing planned at this time for [a meeting], but the president has talked about potentially meeting with President Xi and we’ll see what progress we make next week”.

Mnuchin and US Trade Representative Robert Lighthizer are scheduled to travel to China next week for the third round of trade negotiations.

Kudlow told Fox Business that there was still a “sizable distance” separating the two sides.

Sharp selloff in US stocks

The news that the two leaders were now unlikely to meet spurred a sharp selloff in US stocks, dashing the optimism that had been building that the countries were progressing towards a deal before tariffs on Chinese imports rise to 25 percent after the March 1 deadline.

The S&P 500 Index tumbled to its low of the day, down 1.6 percent in its biggest drop in more than a month. Treasury bond yields dropped as investors sought safety in sovereign US debt. The benchmark 10-year yield slid four basis points to 2.66 percent, the lowest in nearly a week.

“I could see where that would impact the markets because, obviously, we had a lift in the month of January from optimism surrounding these trade talks,” said Peter Jankovskis, co-chief investment officer at OakBrook Investments LLC in Lisle, Illinois. “It does make sense the market is pulling back somewhat on that.”

Last week, Chinese and US negotiators said they made “important progress”, China’s state media reported following the conclusion of two days of high-level talks in Washington.

Speaking at the White House during a meeting last week with Chinese Vice Premier Liu He, Trump had said he was optimistic that the economic powerhouses could reach “the biggest deal ever made”.

Despite the optimism, the White House emphasised in a statement that a scheduled tariff increase on $200bn of Chinese goods to 25 percent from 10 percent was a “hard deadline” if no deal was reached by March 1.

Trump said last week he did not think he would need to extend the March 1 deadline, adding that he believes “every point will be agreed to” when he meets Xi.

Washington complaints about technology transfers and intellectual property protections, along with accusations of Chinese cybertheft of US trade secrets and a systematic campaign to acquire US technology firms, were used by Trump’s administration to justify punitive tariffs on $250bn worth of Chinese imports.

China has retaliated with tariffs of its own, but has suspended some and is allowing some purchases of US soybeans during the talks.

Chinese officials have said their policies do not coerce technology transfers.