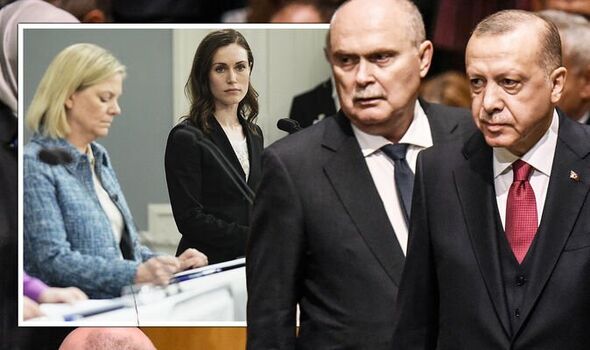 The Turkish President argued Finland’s plan to apply for NATO membership, and the expectation that Sweden will follow, would bring about the expansion of the alliance that Russian President Vladimir Putin aimed to prevent from happening by invading Ukraine. Opposition by seemingly neutral Turkey, which had acted as a venue for Russia-Ukraine peace talks, follows warnings of retaliation by Moscow, with the foreign ministry stating the Kremlin “will be forced to take retaliatory steps, both of a military-technical and other nature” if the Nordic NATO plans materialise.

President Erdogan told reporters in Istanbul: “We are following the developments regarding Sweden and Finland, but we don’t hold positive views.”

Saying it was a mistake for NATO to accept Greece as a member in the past, he added: “As Turkey, we don’t want to repeat similar mistakes.”

Significantly ramping up the tone of his stance, Mr Erdogan then said: Furthermore, Scandinavian countries are guesthouses for terrorist organisations.

“They are even members of the parliament in some countries.

“It is not possible for us to be in favour.”

Turkey has been officially supportive of enlargement since it joined NATO seventy years ago. Any decision on enlargement must be made by unanimous agreement of its members.