The north-south divide in the UK will deepen over the course of the next few days as southern England sees a balmy mini heatwave, while the north braces itself for accompanying wind and rain. Overnight was warm with few places dipping below double digits, and the good start will continue for much of the south as the day progresses.

The sudden warmth in temperatures is thanks to high pressure stretching across the Atlantic from the Azores Islands, off the coast of Portugal.

Unfortunately for Northern Ireland, Scotland and much of northern England, rain and brisk winds up to 30mph will be accompanied by average temperatures for this time of year.

Referring to northern Scotland, Met Office forecaster Mark Wilson said: “Here we see thicker clouds, outbreaks of rain – it could be quite heavy as well – and a strengthening breeze too.

“So, here will be quite cool but elsewhere across the UK, despite the cloud, it’ll be a fairly warm day for the time of year. 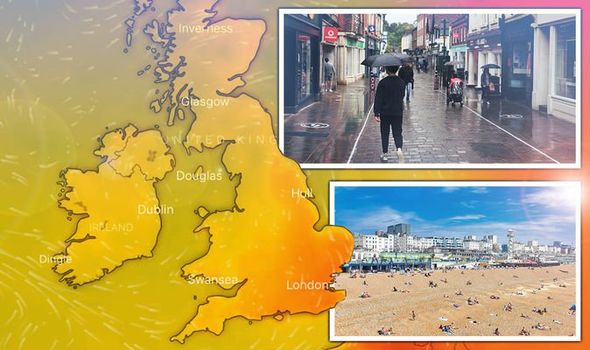 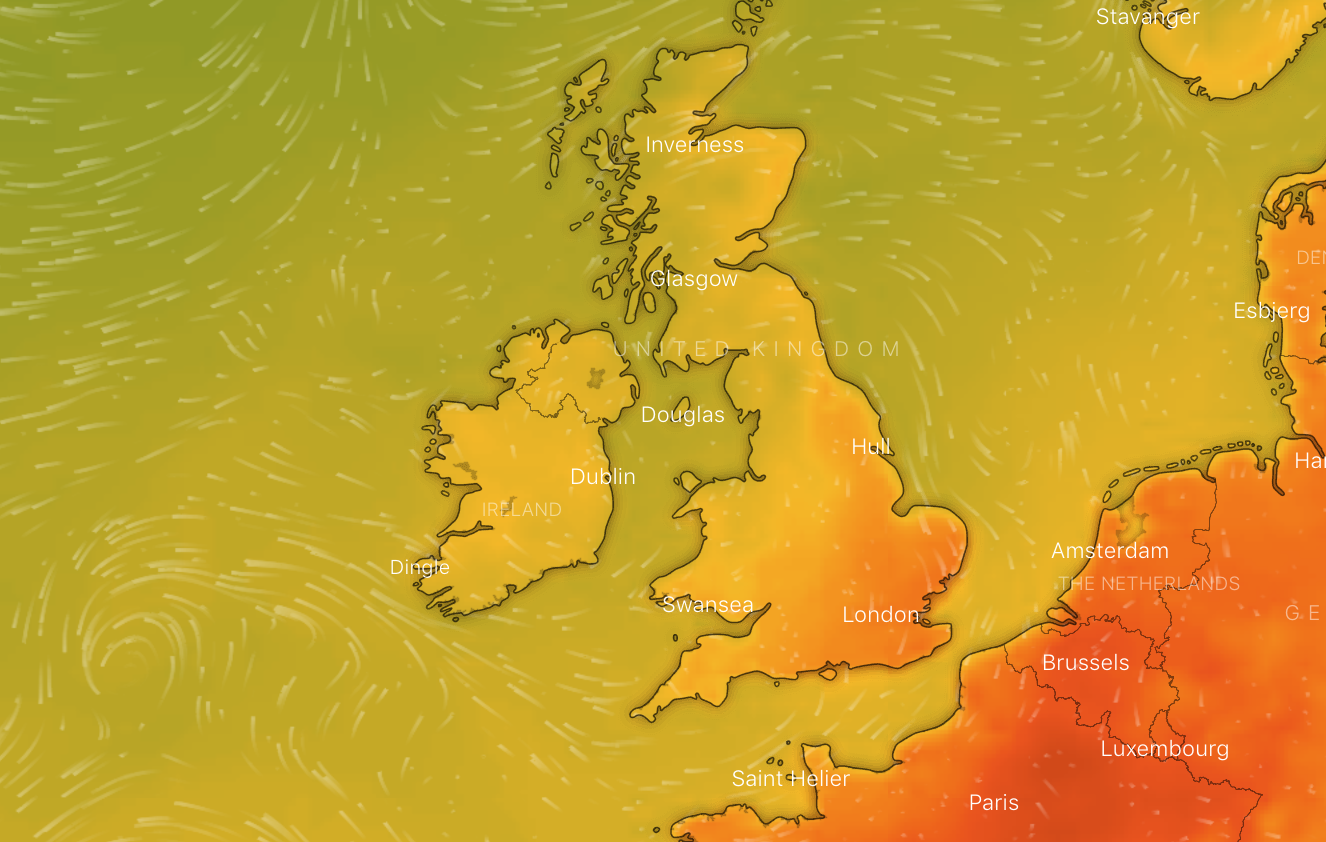 “Temperatures reaching highs of 23 or 24 degrees – fairly warm and fairly muggy feel to the weather as well.

“Even around eastern Scotland, we can see highs of 20C.”

The rainy front will stay in much of Scotland throughout the day, eventually heading down to northern England.

“By the early hours of Wednesday morning a fairly damp picture across parts of northern England,” he added. 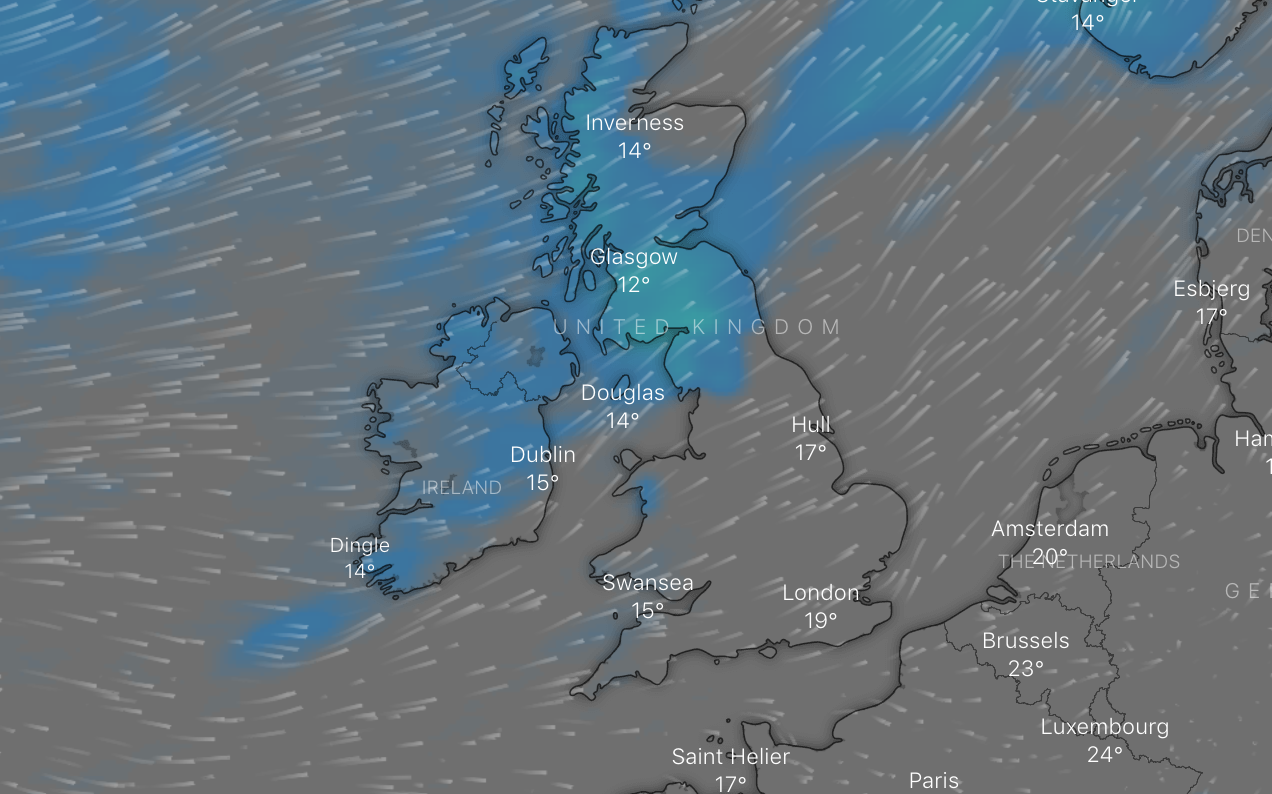 There will be clear skies through Wednesday evening for most parts of the country.

Thursday will bring a chillier day for many parts of Britain after the mini-heatwave.

But there will still be outbreaks of sun in eastern parts of England.

Alex Deakin, Met Office Meteorologist, said: “It will be warm once more on Wednesday across the southeast.

“But for most places you’ll notice a fresher feel.

“But also most places will brighten up after a fairly cloudy start.

“Why the change? Well it’s all to do with a cold front steadily slipping its way southwards across the country during Tuesday night and then through Wednesday introducing cooler air behind it.

“Meanwhile the warm air will hang on across the southeast for most of Wednesday.” 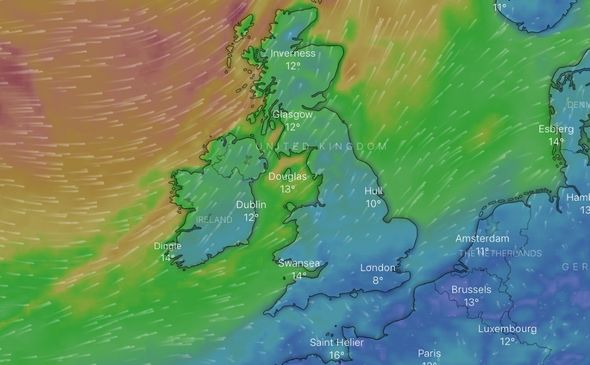 Mr Deakin added: “We should start with plenty of sunshine over southern Scotland and Northern Ireland to start Wednesday.”

However, the picture is a little different for the rest of the week, with Mr Deakin warning of frostier temperatures from Thursday onwards.

He said: “For most it will be a clear night and now – because that cold front’s gone through, we’re in the colder air – it will be quite a chilly start to Thursday.

“Many many rural areas will be well down into single figures, and a touch of ground frost is possible. So a chilly old start to Thursday.”

Temperatures will drop throughout the country on Thursday, with London only peaking at 19C, and some northern parts only seeing highs of 12C.

The Met Office Forecast for Wednesday to Thursday reads: “A band of cloud and patchy rain moving southwards across England and Wales, not reaching the southeast until evening where it will feel warm.

“Brighter skies following from the northwest with sunny spells, though a few showers for northern Scotland.

For Thursday, the Met Office predicts: “Most parts dry with broken cloud and sunny spells, though not as warm as recently in the south.

“Turning windy in the northwest with some bursts of rain later.”