Many regions will not have long to recover from the devastating floods caused by Storm Dennis over the last few days, as more wintry weather is on the way. Net Weather forecaster Jo Farrow has warned cold air will sweep in from the Atlantic over the next couple of days. She said: “New yellow warnings are beginning to pop up in the wake of Storm Dennis.

“Overall the flow remains blustery from the west, with colder air curling round off the northern Atlantic.

“It doesn’t look as stormy but with the saturated ground, high river levels and existing flood problems any extra rainfall could cause issues.

“There will be strong winds as one low pressure deepens away to the NW between Iceland and NW Scotland later on Wednesday.

“The fronts from this will bring rain across the UK and then another low pressure looks to affect northern areas by Friday. 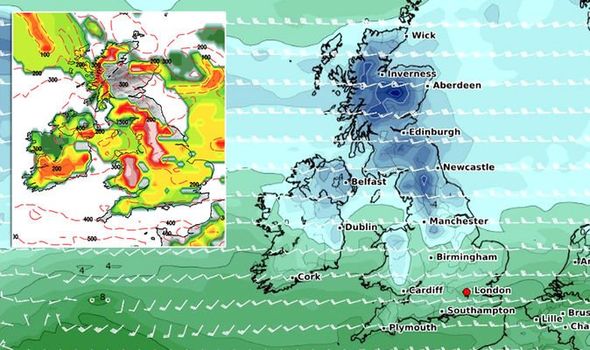 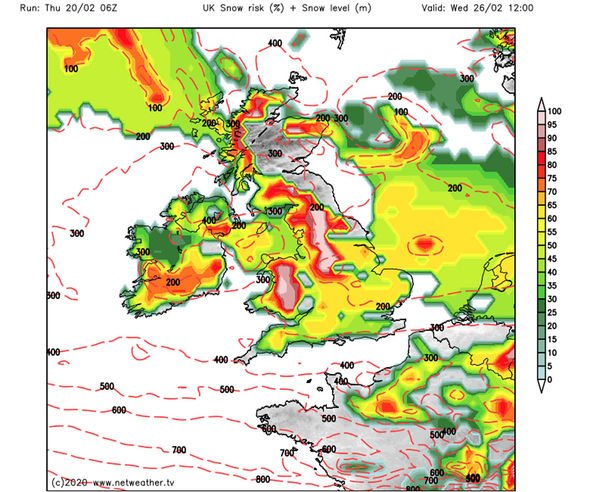 Snow charts have shown at least seven inches of snow falling in northern parts of Scotland, including Inverness.

A couple of inches of snow will even fall further down north-west England in Cumbria and Liverpool.

The snow is expected to head into northern England early next week with even the south of the country facing a good chance of snow between the middle and end of next week.

More snow snowers are expected coming in from the north Atlantic into the beginning of March although it is too early to forecast which parts of Britain will be affected.

Temperatures will also plummet to -2C on Sunday in Scotland too.

The wintry weather comes as a threat of “significant flooding” remains in northern England, as heavy rain continues to fall on already flooded and saturated ground. 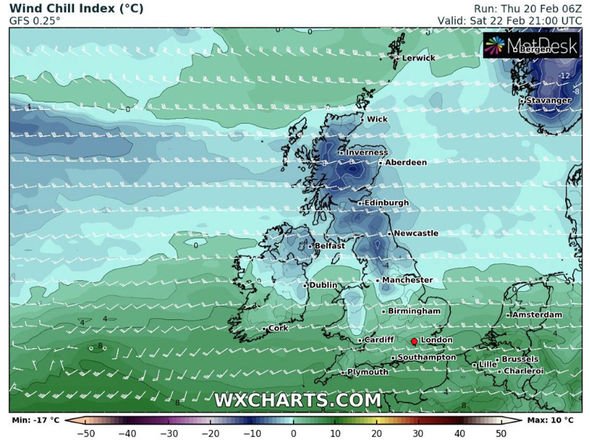 The Environment Agency (EA) warned of worsening conditions across the Pennines and parts of Yorkshire.

They said that ongoing river flooding remains “probable” for the English-Welsh border around the River Severn for the rest of the week.

The body said that England has already received 144 percent of its average February rainfall, and record river levels have been broken on the Colne, Ribble, Calder, Aire, Trent, Severn, Wye, Lugg, and Derwent.

Director of incident management Caroline Douglass has warned people to be “aware of their flood risk”.

DON’T MISS
BBC News reporter struck by wave as he reports on Storm Ellen [WATCH]
What to do if a flight is delayed or cancelled amid Storm Ellen fears [EXPLAINED]
Met Office warning: New alert issued as Britain facing 75mph winds [WARNING] 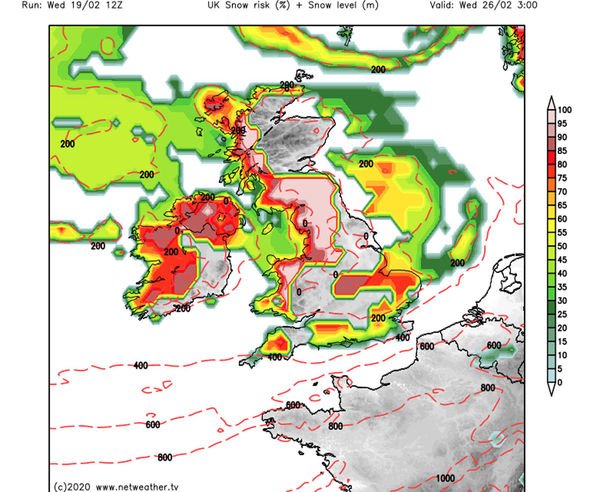 She said: “This is the third weekend we have seen exceptional river levels and stormy weather, and with the effects of climate change, we need to prepare for more frequent periods of extreme weather like this.”

The EA predictions were echoed by the Met Office, who have forecast another deluge across northern regions and parts of England in the coming days.

Yellow weather warnings for rain and wind remain in place throughout the week in the north of the UK.

A total of 91 flood warnings remained in place across England and Wales on Thursday afternoon, alongside six threat-to-life severe flood warnings. 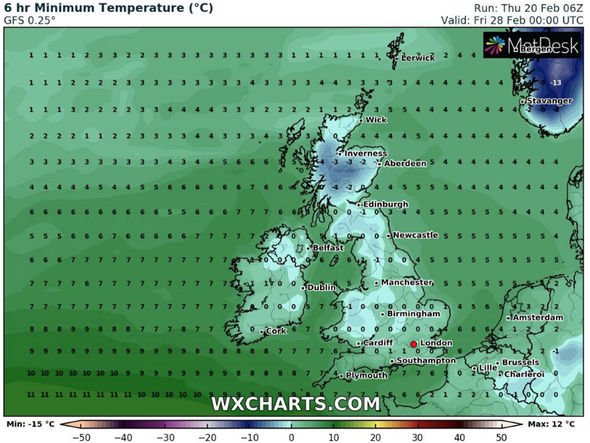 The more extreme warnings were all near the English Welsh border, around the rivers Severn, Wye, and Lugg, where people have already experienced flooding.

There are also 154 flood alerts.

Met Office forecaster Grahame Madge said: “There is still heavy rain in the forecast, and some of this will be falling on areas already affected by flooding.”

Overnight, a new weather front will bring rain to parts of Northern Ireland and Scotland, and will move south towards the Lake District and the North Pennines by morning. 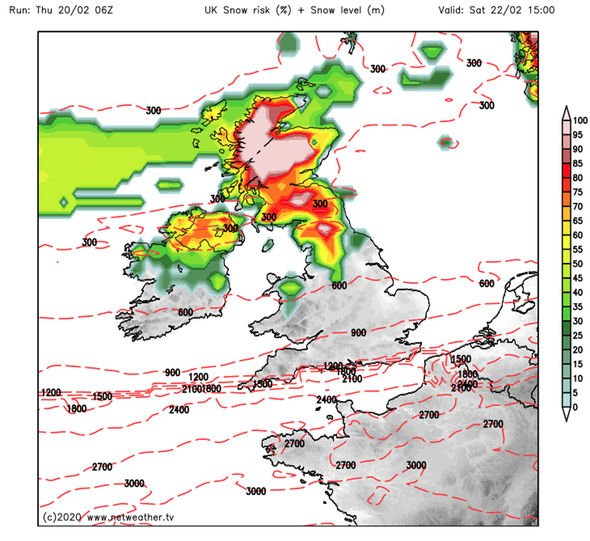 Mr Madge explained: “The yellow warning is in place from Sheffield to North Yorkshire and beyond.

Capel Curig in Snowdonia, north Wales, has had the highest rainfall of the last day, with 80mm falling in the 24 hours to 10am.

Levens Hall, in Cumbria, was subjected to 55.2mm of rain, and Morecambe, Lancashire, got 51.6mm over the same period.