Scorching weather seen over the Bank Holiday – where highs topped 25C (77F) – could be hampered for some – with thunderstorms expected to smash into parts of the country. BBC Weather forecaster Darren Bett warned the torrid conditions could batter the southwest of England and Wales within the next 24 hours.

He said: “We’ve got a few weather fronts on the scene mind you.

“This one is bringing more cloud into the Western Isles – into some western parts of Northern Ireland.”

He added: “But if we look towards the southwest, the weather’s starting to change as we move into Wednesday.

“Lowering pressure – that’s going to bring with it a band of cloud to the southwest of England and Wales, in particular, and some showers. 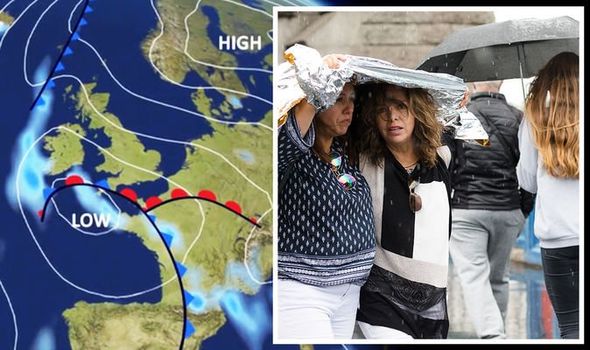 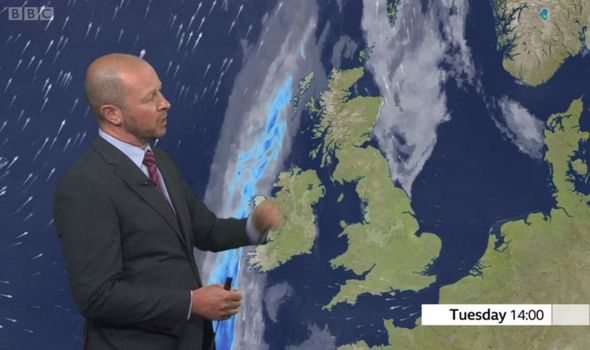 “These could be heavy and thundery.

“They may just nudge up into Hampshire and Merseyside and eventually Northern Ireland.

“That area of low pressure and weather front then starts to drift its way northwards.

“Overnight those heavier showers tend to become fewer and the showers are much more hit and miss as we head into Thursday and should be lighter. 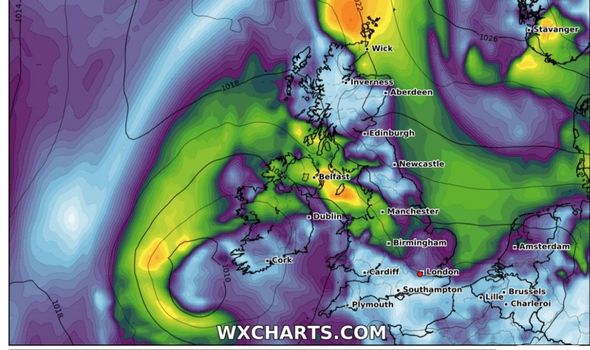 “But we’ve got more cloud moving northwards into northern England and into Scotland.

“South of that, things should be brightening up.”

Despite the conditions moving in, other parts of the country on Wednesday could see conditions reach 26C.

And, luckily for sun-loving Brits – the weekend’s glorious weather is set to return, Mr Bett said. 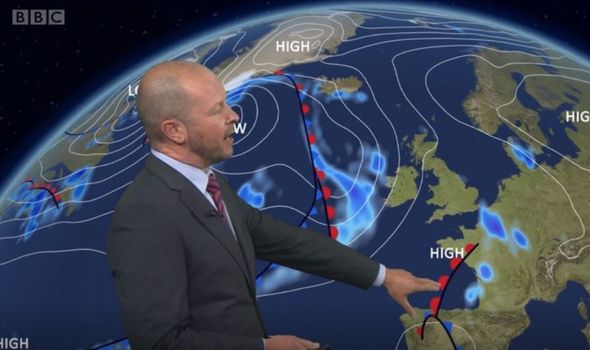 But, the scorching heat may be restricted to certain parts of the UK.

Mr Bett said: “This weather front to the south and southwest could be a bit of a problem.

“There’s a lot of disagreement between the computer models (over what this will mean).

“There is some potential for some heavier showers, at least for a while, along the southeast of England and into East Anglia too.” 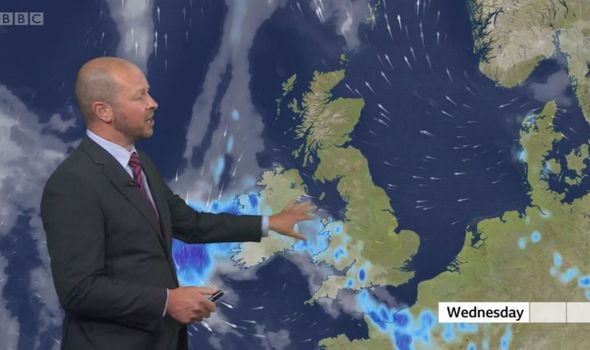 Another “weak weather front is heading in from the Atlantic” as the weekend approaches.

It comes as a yellow weather warning has been put in place by the Met Office for thunderstorms for parts of the southwest of England on Wednesday morning.

An alert warned: “An area of thunderstorms will move northwards into southwestern parts of the UK on Wednesday morning.

“Lightning is likely to be the main hazard from this though some heavy rain and hail is possible, with perhaps 15-20 mm of rain in a short period for some spots.

“The nature of thunderstorms is that many areas will see little or no rain and miss the lightning but where they do occur the increased numbers of people makes disruption more likely.”