BBC Weather: Rain and snow to move in across the UK

Heavy Arctic downpours and freezing winds driven by a ‘collapsed Polar Vortex’ threaten to thrust the nation back into the deep freeze within days. Shifting weather patterns over the North Pole will open the floodgates to the fury of the Baltic, through the end of the month and into February. Weather models show polar gusts pushing wind-chill temperatures to -17C and more snow arriving towards the end of this month.

“Some of this snow will be at least be several feet deep in places, and parts of the north could see lasting snow, particularly, across higher ground in parts of Wales and Scotland.

“Even February, which we expect to be less cold, will still see the grip of winter and this little ice age pattern trying to hold on.”

A spokesman for the Weather Company (IBM) said: “Northern parts of the British Isles may see at least see some snow this weekend, maybe as far south as the English Midlands.

“Later next week, high pressure intensifies and expands over the Nordic region resulting in a colder easterly flow across the British Isles.

“Snow may become common for eastern coastal counties of Britain.

“Into mid-February, models do try to bring less cold conditions back in from the west or north-west but some scenarios see the colder conditions persisting.” 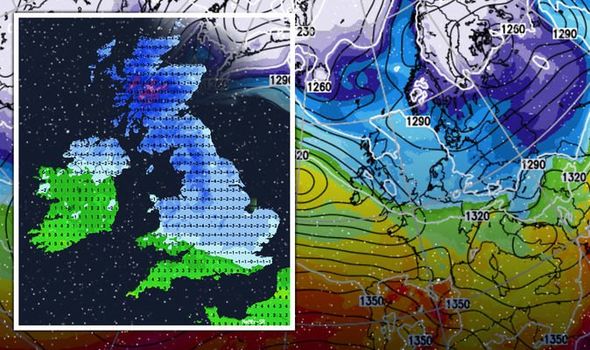 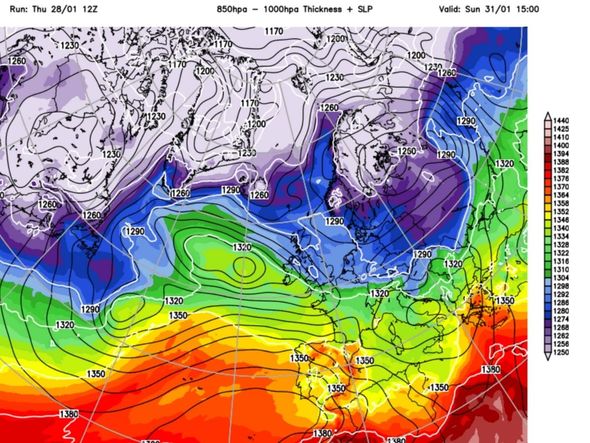 Britain has felt almost spring-like over the past day or so with an Atlantic influence set to push thermometers into double figures through the next 24 hours.

Southern Britain will be mildest although Scotland and northern England will continue to brace persistent chilly winds.

Widespread cold will return by the weekend bringing the risk of further snow as quarrelling weather fronts turn Britain into a ‘battleground’.

Jim Dale, meteorologist for British Weather Services, said: “Atlantic fronts heading in at the weekend will hit the cold air over the UK and this could bring more snow, especially across central England.

“This milder air from the west will crash with the colder air over the country creating a battle ground.”

A beast from the east scenario later next month is ‘not out of the question’ as cold air over Russia and Siberia stretches towards Britain, he warned.

“The Polar Vortex is now over Russia and Siberia, and with it a very cold pool of cold air in this region,” he said.

“There is still plenty of time as we go through early to mid-February to see this beast from the east stretch its claws towards Britain.

“There is a chance of seeing raw easterly winds, and I would not be surprised to see this sort of situation develop through the rest of winter.

“Whether it brings snow or not is not certain, but winter is not over yet, and we are keeping our eyes on this.” 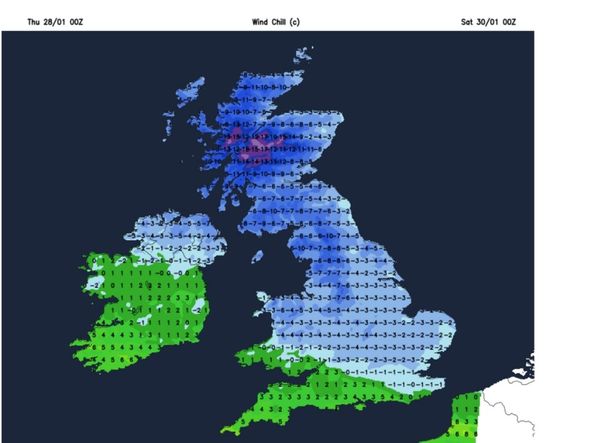 Ahead of temperatures dropping, the Met Office has issued severe weather warnings for snow in Scotland this weekend.

Heavy wintry downpours threaten travel disruption and power outages with rural regions at risk of being cut off.

A Met Office spokesman said: “Heavy snowfall may bring significant disruption to travel across parts of central and northern Scotland.

“Some roads and railways will be affected with longer journey times by road, bus and train services.

“Some services may be cancelled and there is a small chance of stranded vehicles and passengers. Some rural communities could become cut off.”

The return of cold weather may be driven in part by a collapse and reassembly of the polar vortex–the body of air which circulates above the North Pole. 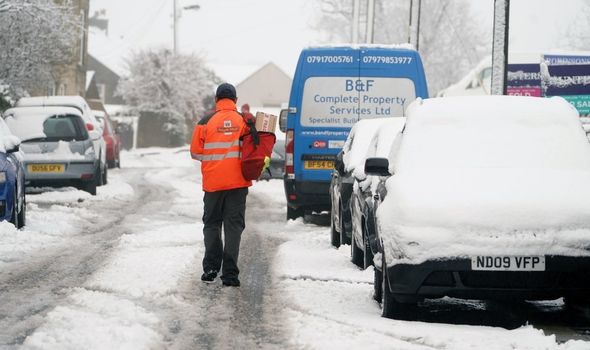 “It is now trying to reorganize and influence our weather again.

“A strong high-pressure system has built over the Aleutians again in the stratosphere.

“It will push/pull the polar vortex out of Siberia and over Greenland and Scandinavia.

“It allows the release of colder air out of the polar regions towards the south, into Europe and the United States.”

John Hammond, meteorologist for weathertrending.com, said disruptive snow is possible through next month.

The Polar Vortex will knock the jet stream out of kilter holding mild air at bay while encouraging colder winds into Britain, he added. 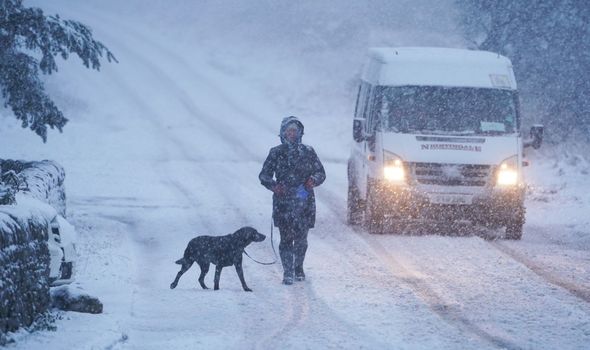 He said: “Having been knocked off-kilter once, the Stratospheric Polar Vortex may be about to endure an even more powerful ‘dent’.

“The comparison with last winter, when the Polar Vortex was strong and supercharged, is stark. The ramifications of this to our surface weather are not remotely nailed down but, rest assured, there will be ramifications.

“I suggest that winds from between north and east will be more prevalent than is typical, and certainly compared with last February.

“It seems likely there will be a period of snow, which may be disruptive. But how much and for how long is not at all clear.”

Mr Dale, author of Weather or Not? Said the Polar Vortex has ‘fragmented’ which in part has driven some of the cold weather.

He said: “It breaks away and a rush of cold air feeds into Siberia and Russia.

“This has the potential to stretch its claws in our direction and will affect us in terms of picking up an easterly air flow.”