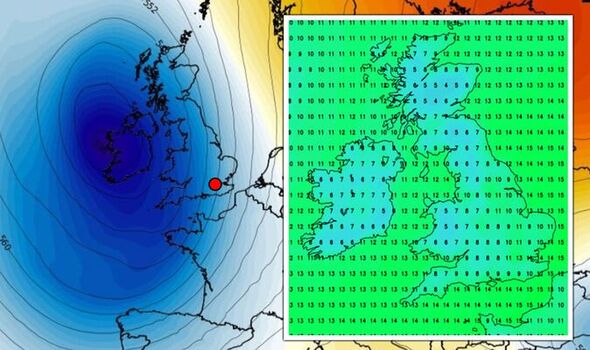 Sun-lovers face winds, rain and thunder as a cold front is dragged across the nation by a mammoth low-pressure system wedged off the west coast. Thermometers will plummet through the start of the week with parts of the country forecast to hit just 10C or 11C.

Southern and south-eastern Britain will hold on to some of the warmth but even here temperatures in the sunshine will peak in isolated spots at 25C.

Much of the country faces showers with coastal regions on alert for winds as low pressure tightens its grip.

Jim Dale, meteorologist for British Weather Services, said: “We have a week of mobile weather ahead as fronts come in from the west.

“With an Atlantic origin, we will also get a Polar maritime airmass across the country and this will bring temperatures down.

“We are not going to see any heatwave this week.”

Western regions will see the heaviest rain while the east can look forward to the best of any dry sunshine. 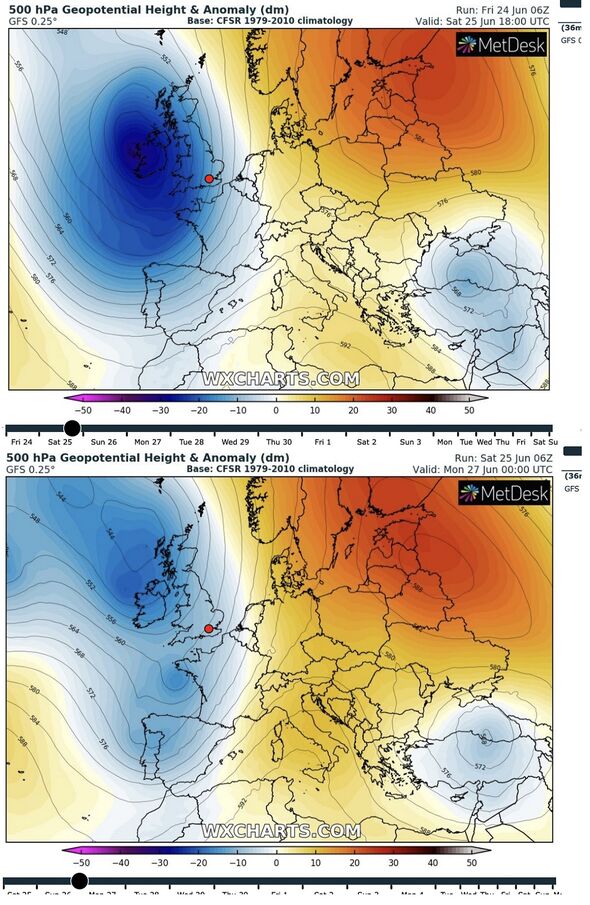 Meanwhile temperatures in the south will hit 25C through the start of the week, but this is in stark contrast to the 30C-plus highs brought by last week’s blazing sunshine.

Alex Deakin, meteorologist for the Met Office, said: “Temperatures are not likely to exceed 25C on Monday and Tuesday with that colder air in place.”

Low pressure will bring “spirals of rain” across the UK through the rest of this weekend and next week, he warned.

Where the sun breaks through ­– most likely across eastern and south-eastern regions – summer warmth will hold on, he added.

He said: “We will see sunny spells between the showers at the weekend and that trend will continue into the new week.

“The likelihood of rainfall is more focussed over western areas.

“Weather systems become more slow-moving, hence why low pressure is hanging around over the weekend and probably into Monday.

“But next week will be dominated by low pressure to the west which means there will be showers around focussed in the west closest to the low.”

Hints of a return to warmth later in the week, however, have prompted bookies to axe the odds on this summer steaming into the record books.

Spokesman John Hill said: “Our betting suggests things are going to get even hotter this summer, and by the time it is over, it will be the hottest summer the UK has ever had.

“We make it odds-on for the highest ever UK temperature of 38.7C to be broken, while temperatures may even climb to as high as 40C.”

Weather models show maximum temperatures in the low-20Cs across the south early next week while Scotland and the north just limps past high single figures. 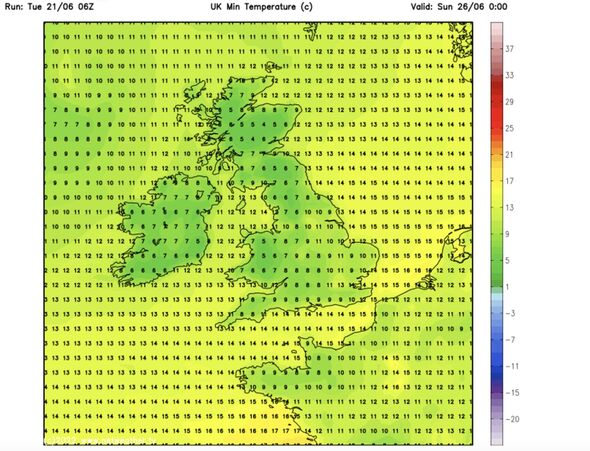 Overnight minimums will drop to 4C in parts while it will feel fresher widely with just the southwest nudging high double figures.

Wimbledon-goers can expect a dry start to the tournament before rain moves into London mid-week.

“It will remain changeable with temperatures close to average next week, with further showers for northern and western areas on Monday.

“An area of low pressure will move in towards the northwest and looks to bring outbreaks of rain, perhaps heavy, across northern and western areas on Tuesday.”