Temperatures will be humid in the mid-20C as a weather front moves in from the west. After a cloudy Tuesday, sun is expected to break out across parts of the UK today. A hot air plume is forecast to sweep in from the tropical Azores bringing with it a 24C heatwave before it is replaced by a chilly frost on Thursday.

The high pressure stretches across the Atlantic from the Azores Islands, off the coast of Portugal, promising clearer skies and sunshine.

Alex Deakin, Met Office Meteorologist, said: “It will be warm once more on Wednesday across the southeast.

“But for most places you’ll notice a fresher feel.

“But also most places will brighten up after a fairly cloudy start. 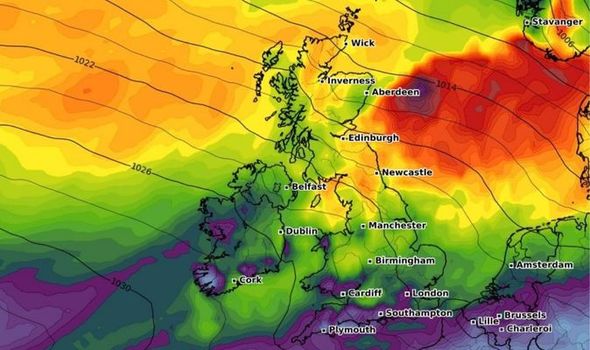 “Why the change? Well it’s all to do with a cold front steadily slipping its way southwards across the country during Tuesday night and then through Wednesday introducing cooler air behind it.

“Meanwhile the warm air will hang on across the southeast for most of Wednesday.”

Mr Deakin added: “We should start with plenty of sunshine over southern Scotland and Northern Ireland to start Wednesday.”

Britons may need to cover up and apply sunscreen as the sun makes its return on Wednesday. 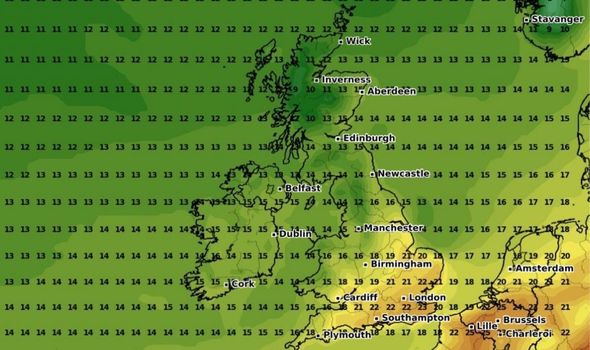 It warns Britons to “seek shade during midday hours, cover up and wear sunscreen”.

Temperatures will feel muggy in areas with some cloud.

Netweather forecaster, Nick Finnis, said: “Feeling muggy under the cloud in the South, temperatures reaching 21-23C, in the North a cooler 16-18C.” 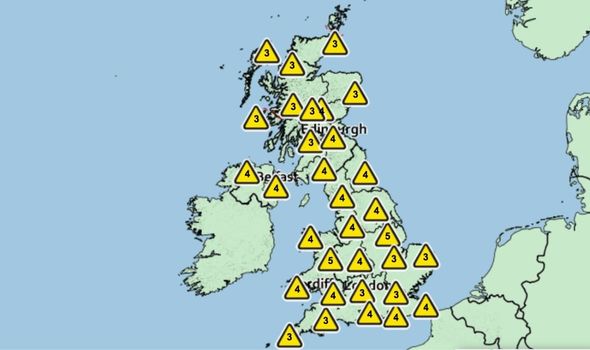 There will be clear skies through Wednesday evening for most parts of the country.

Thursday will bring a chillier day for many parts of Britain after the mini-heatwave.

But there will still be outbreaks of sun in eastern parts of England.

Mr Finnis said: “A cooler and fresher feel for all on Thursday, as the cold front clears south over the near continent while a ridge of high pressure builds in from the southwest, keeping much of England and Wales dry. 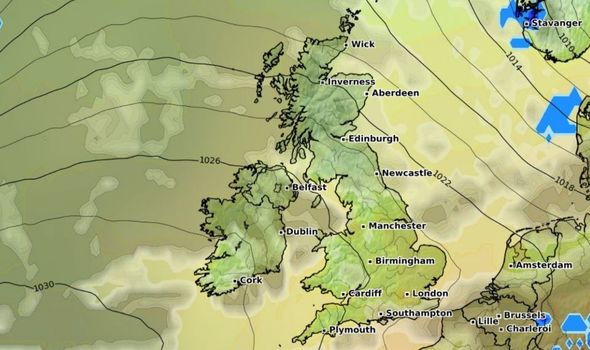 “Sunny in the morning for most, sunshine perhaps becoming confined towards eastern England in the afternoon as cloud thickens in the west.

“Cloudier and breezier day for Scotland and Northern Ireland, with patchy rain developing from the west across western Scotland into the afternoon.”

The fresher temperatures come as a relief after Tuesday’s tropical humid weather.

All parts of the UK reported temperatures above 20C on Tuesday.

In some areas, the mercury rocketed up to the mid-20Cs.