The Met Office named the third storm of the 2020/21 storm season on Monday, as Storm Christoph brings torrential rain and fierce winds to the UK. Met Office yellow and amber weather warnings span much of the UK over the next few days, with flood warnings in place as up to eight inches of rain falls.

The amber weather warning is in place until 12pm on Thursday and warns of persistent rain into Wednesday and Thursday with up to 7.87 inches (200mm) possible.

The areas covered by the warning include the East Midlands, East of England, North West England and Yorkshire and Humber.

Weather maps from Netweather, WXCharts and Windy show significant rainfall across the UK today, with densely concentrated downpours over the north of England.

A major incident has been declared in South Yorkshire in preparation for the intense rainfall over the next few days. 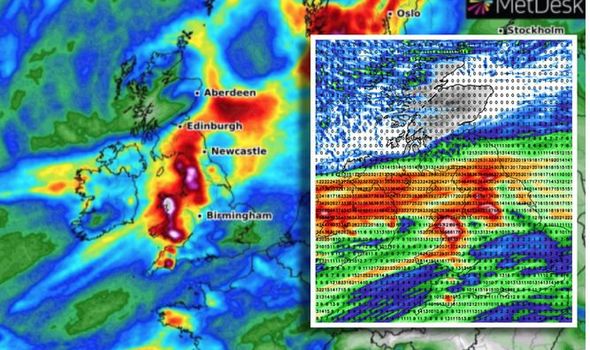 Ros Jones, mayor of Doncaster said emergency protocols were instigated on Sunday, with sandbags handed out in flood-risk areas.

She said plans would run alongside the region’s Covid-19 response, adding: “I do not want people to panic, but flooding is possible so please be prepared.”

The Met Office has warned some homes and businesses are likely to be flooded, causing damage to some buildings.

The forecasters have issued a “danger to life” warning due to fast-flowing or deep floodwater, while there is a “good chance” some communities may be cut off by flooded roads. 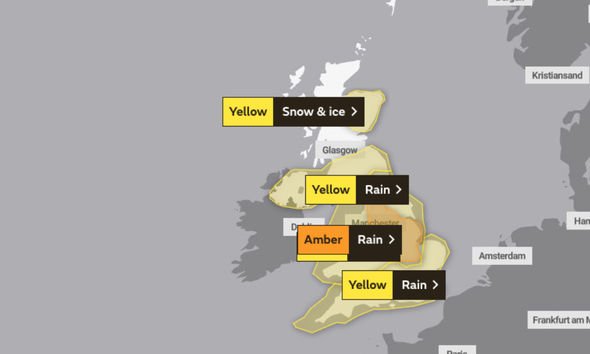 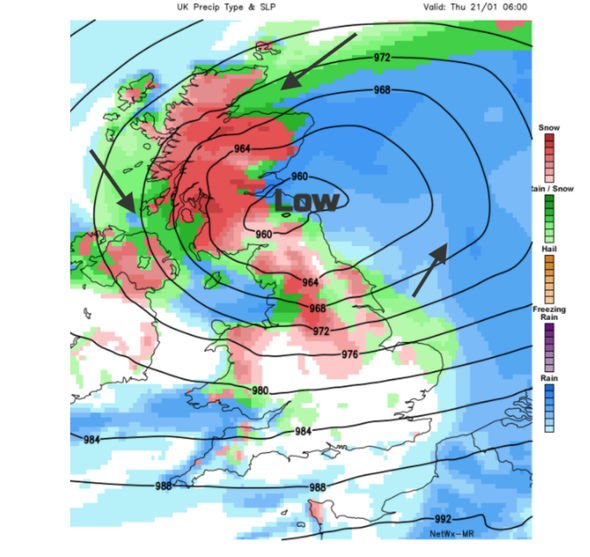 Chief Meteorologist Dan Suri, said: “These amounts of rainfall along with snow melt present a real threat of flooding and people should keep a close eye on flood warnings from the Environment Agency and Natural Resources Wales.

“As the system moves away into the North Sea Wednesday night and Thursday morning there will be strong winds along the east coast for a time.

“Meanwhile, colder air coming southwards into the weather system brings the risk of further snow on the back edge of this system.

“Temperatures will gradually fall across the UK through the end of the week and into the weekend bringing a return to widespread overnight frosts.”

There are currently 126 flood alerts in place across England, with days of rain and snowmelt saturating ground.

Forecaster Greg Dewhurst said the heavy rainfall was unusual for this time of year.

He continued: “Some places will see well above a months rainfall over two to three days.

“So there is likely to be some severe impacts over the next few days.” 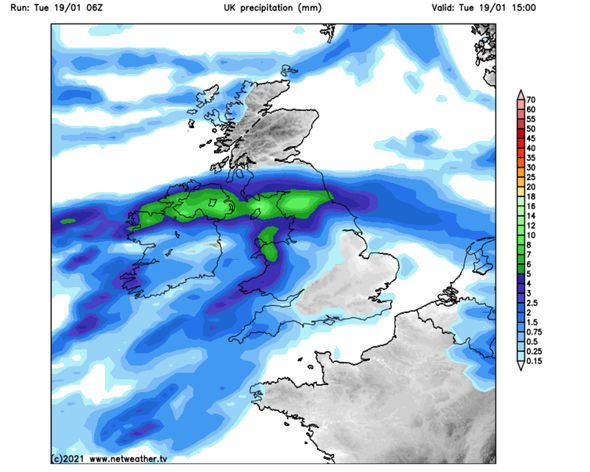 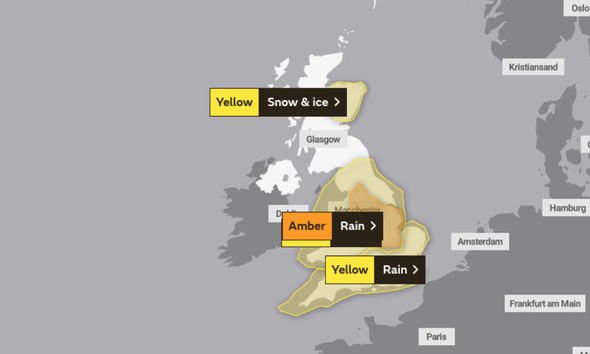 An amber warning for heavy rain is in place for northern England with heavy rainfall combined with some snowmelt across the hills is likely to lead to some flooding.

The Environment Agency has described the mix of torrential rain and melting snow as “volatile” with councils in the affected areas preparing for possible evacuations.

Catherine Wright, acting executive director for flood and coastal risk management at the Environment Agency, said: “That rain is falling on very wet ground and so we are very concerned that it’s a very volatile situation and we are expecting significant flooding to occur on the back of that weather.”

Should a severe flood warning be issued residents in the affected areas may have to evacuate. 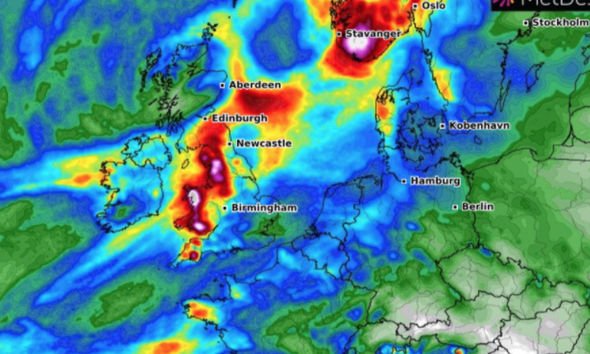 Currently, there are 11 flood warnings and 115 flood alerts in place.

The 11 flood warnings are for

See which areas are affected by flood alerts here on the Government’s website.

Katharine Smith, Flood Duty Manager at the Environment Agency, said: “Much of the ground in parts of northern, central and eastern England is already saturated and the rainfall together with snowmelt is expected to bring significant river and surface water flooding and could cause damage to buildings in some communities.

“Flooding could continue to affect parts of central, eastern and northern England into Friday, with localised flooding of land and roads a possibility elsewhere across much of country on Wednesday and Thursday.

“Environment Agency teams are out on the ground clearing grills, screens and closing flood barriers.

“We urge people to keep away from swollen rivers and not to drive through flood water – it is often deeper than it looks and just 30cm of flowing water is enough to float your car.”