Yellow weather warnings for thunder from the Met Office are in place today for Wales, Northern Ireland and North of England, with showers and lightning forecast to hit the warning areas. And forecasters warn today’s weather will set a precedent for the rest of the week, with continued thundery downpours in store for the next few days.

Conditions over the weekend felt humid and warm, with highs of 25.5C at Santon Downham on Sunday, but cooler conditions and persistent low cloud and sea fog to the coasts of eastern England, and eastern Scotland.

The warning areas are expected to see torrential rain, thunder, lightning and even hail between 1pm and 9pm on Monday, with the Met Office warning more of the same is on the way for the rest of this week.

Up to two inches of rain could fall in isolated areas, and the heavy rain, hail and thunder could cause some travel disruption and flash flooding. 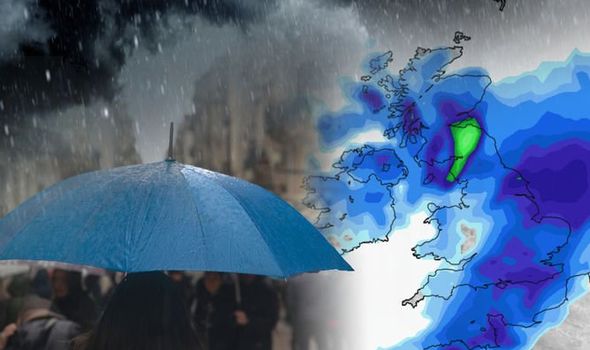 The Met Office also warns there could be some damage to a few buildings and structures from lightning strikes.

There is also a good chance driving conditions will be affected by spray, standing water and/or hail, leading to longer journey times by car and bus

Met Office spokesman Oli Claydon told Express.co.uk the weather will be “generally similar weather throughout the week, with some sun but thundery showers across the rest of the week.”

While temperatures may feel warm in the sun for many in the south of England, to the North and in Scotland there could be as much as 11C disparity between the highs on Monday. 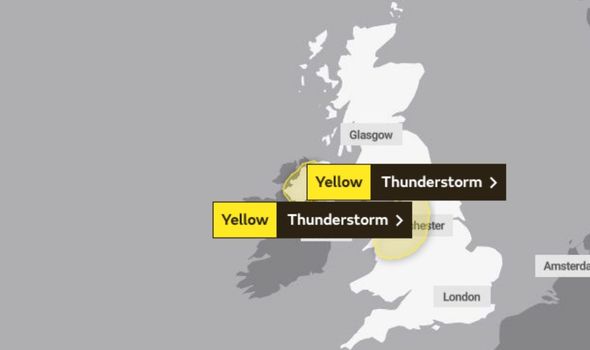 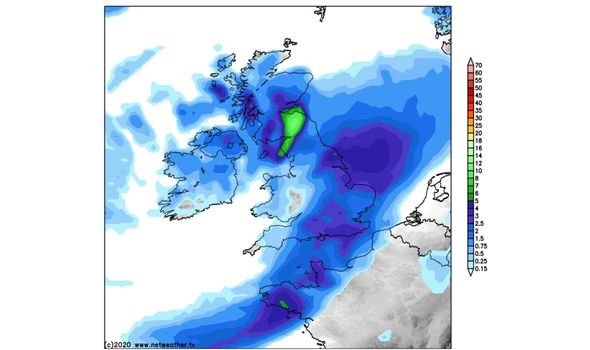 Mr Claydon said: “To the North East coast, cloud cover over the North Sea will bring cooler temperatures, elsewhere will be warm in the sunshine and mild.”

In Edinburgh, temperatures won’t climb above 14C on Monday, while in London, highs of 25C are expected.

Throughout the week, “temperatures will be consistently building and feeling rather mild for much of the UK but that isn’t the story for the weather this week”, Mr Claydon added.

Tuesday’s forecast is “a similar picture to Monday, with widespread showers reaching the east, with some occasional bright and warm patches.”

The Met Office forecaster added: “There will again be thundery, heavy showers with more cloud on Tuesday as the pattern continues.”

Wednesday will also follow the pattern of thick cloud, patchy sunshine and heavy showers, but Mr Claydon said “there will be a change overnight into Thursday.”

He added: “This is due to a band of rain heading across the south bringing persistent downpours into Thursday morning.

“However, they will peter out quite quickly and it will be drier on Thursday than the rest of the week.” 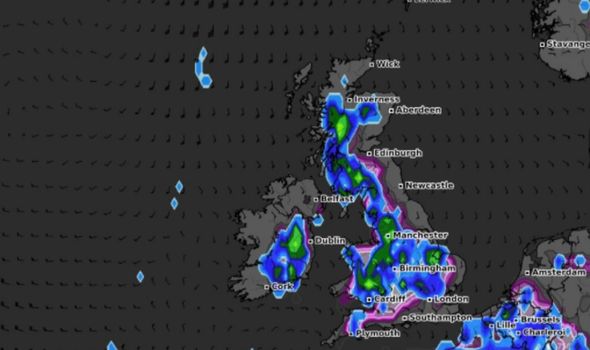 Friday again will be a rain-filled day according to the Met Office, spreading to the south of England this time.

Mr Claydon said the “unsettled weather this week is due to a weak low lingering over the UK” however we could see more settled conditions on Saturday and Sunday.

This is due to “another low” which “will track from the Atlantic and knock the mobility over the weekend, making for more stable conditions.”

Netweather explained of the showers this week, their cell nature means one location could see a heavy downpour but just down the road it remains dry, although you might see the dark ominous cloud in the distance.

Overnight rain will possibly break out over western Scotland with low cloud in the east.

Netweather advises as the warmth of the day builds on Tuesday, showers will begin to break out over England and Wales.

With very light winds, these will be slow-moving and again there could be thunderstorms.

Overall, a thundery, rainy and overcast forecast for the week ahead.