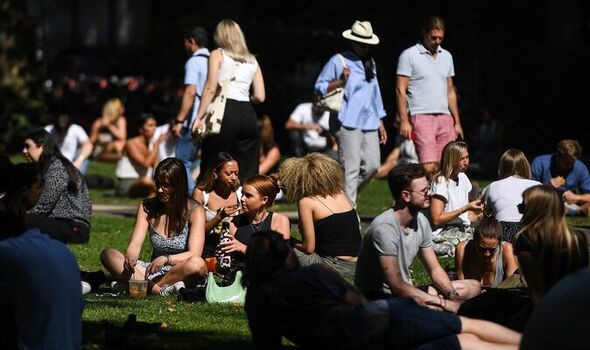 Highs of 73F (23C) – and possibly even 77F next week – are on the cards as balmy days head our way, the Met Office says. The prediction comes as a threemonth forecast suggests the chances of hot weather are double that of previous years.

While the going may have been soggy at Chester Racecourse yesterday, meteorologist Marco Petagna said we could be basking in the heat for up to nine days, with temperatures peaking in the South.

He said temperatures were several degrees above where they should be at this time of year and there was a “small chance” the mercury could hit the high 70s.

He said: “The near continent is getting hot and we’re getting a little bit of that warmth into London that will give us the warmest day of the year so far, next week.

“A frontal system that comes in around Tuesday to Wednesday rides up over the North, giving them some rain – but underneath that you’ve got a warm plume moving up from France and Spain.”

And forecasters believe the balmy temperatures are here to stay. The Met Office three-month outlook says: “There is an increase in the likelihood of warmer-than-average conditions in the month ahead.

“Predictions are consistent in suggesting an increase in the likelihood of temperatures being above average overall. While this doesn’t necessarily mean heatwaves will occur, it does increase the likelihood compared to normal.”