Although Friday proved to be a clear day for many Britons across the country, the outlook is set to worsen severely on Saturday morning. Such is the severe band of weather heading towards the UK, the Met Office has issued two yellow weather warnings for rain in the north of the country.

In graphs produced by forecaster, WX Charts, the UK is set to be battered by winds as strong as 90kmph (55mph) on Saturday morning.

Although the band of poor weather will not remain over the UK for a sustained period of time, a second storm is forecast to hit Britain on Monday.

Commenting on the forecast over the next few days, Met Office meteorologist, Greg Dewhurst reported the “wet and windy weather” will start to move in from the Atlantic on Friday night.

He added: “As we move into the weekend frontal systems start to move in from the Atlantic. 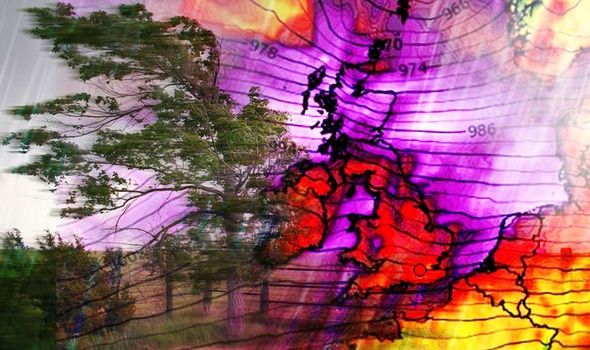 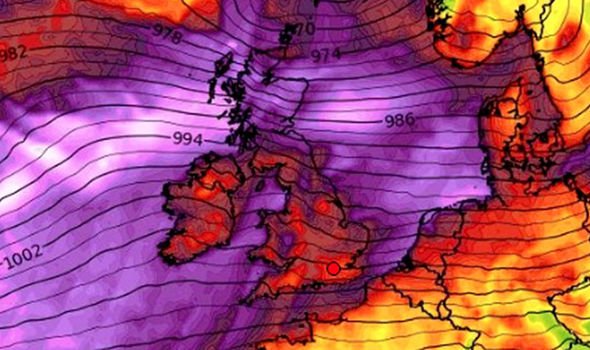 “Isobars return across the chart indicating a windier outlook.

“In the early hours of Saturday, we will see thicker cloud arrive.

“Patchy rain will cross into Northern Ireland arriving on Friday and will arrive in western parts of the UK by Saturday morning.”

The band of wet weather will be at its worst in Scotland and Northern Ireland on Saturday afternoon. 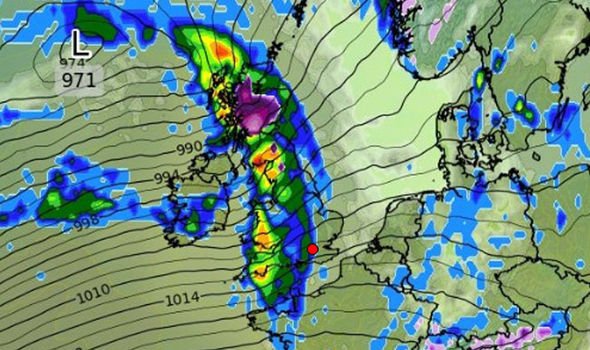 Progressing through the day, the rain will move across the UK as most of the south is drenched.

On Sunday, there is a better outlook as the heavy showers move towards mainland Europe.

Those brighter spells will not last long, however, as WX Charts shows the second band of torrential weather hitting the UK on Monday.

Once again, winds could hit speeds close to 90kmph as Britons are battered by unsettled conditions. 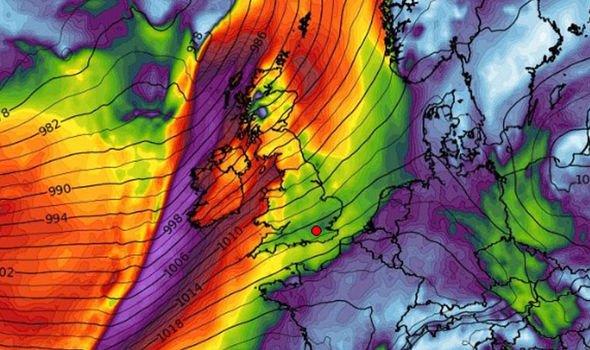 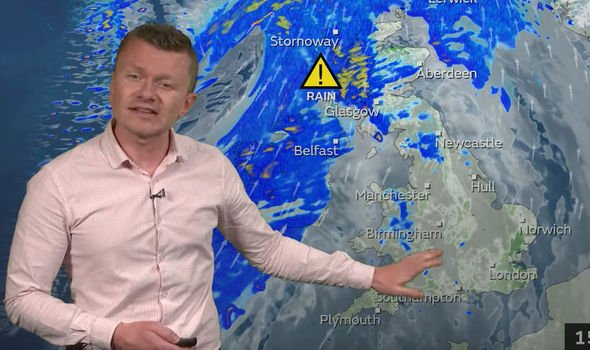 As well as the wet and windy conditions, the Met Office has warned temperatures could drop to as low as -2 (28.4F) during the initial band of stormy weather.

Across the country, the Met Office also warned temperatures will not reach much beyond 5C (41F) on Saturday morning.

The Met Office’s own warning reads: “Outbreaks of rain will become persistent and occasionally heavy through Saturday across much of Western Scotland and parts of Southern Scotland.

“This, in combination with a partial thaw of lying snow is likely to lead to some flooding in a few places.

“Rain will clear southeastwards through Saturday evening to be replaced by scattered showers. 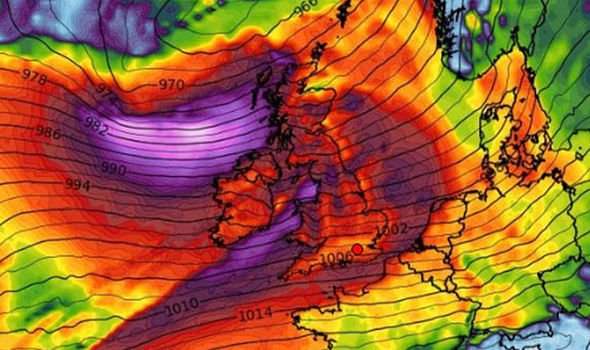 The UK has also been hit by three separate storms recently; Ciara, Dennis, Jorge while the next will be Ellen.

February was also registered as the wettest on record and approximate Met Office statistics showed the UK was covered by 209.1mm of rainfall.