Storm Jorge was named by the Spanish meteorological service on Thursday and the latest maps show high winds will batter coastal areas of Ireland and the UK. The Met Office has forecast inland gusts of 60mph.

The area of low pressure will also see four inches of rain fall in areas already affected by severe floods.

Rain will be heaviest in parts of Wales and northern England on Friday night and the Met Office has issued yellow weather warnings.

There are wind warnings in place for Northern Ireland, Wales, southern Scotland and most of England.

In Ireland, Met Eireann has issued orange warnings for wind where the west coast of the country will see 80mph winds. 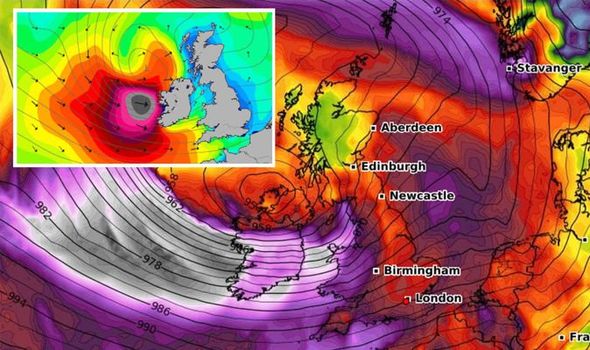 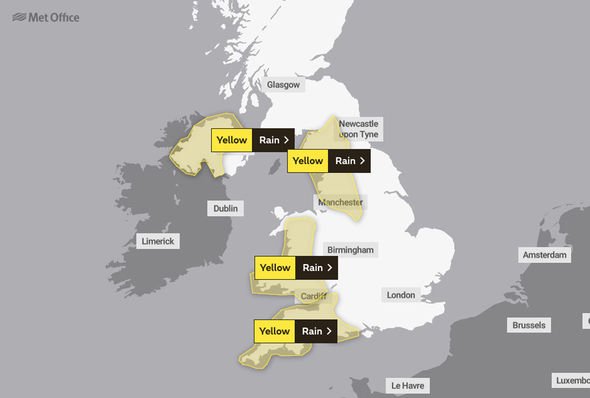 The Met Office has issued a yellow wind warning for Saturday but before then there are several rain alerts in effect.

Between 3am on Friday and 6am on Saturday, much of the southwest of England will see heavy rain that may cause flooding and travel disruption.

Between 6am on Friday until 6am on Saturday, much of Wales is under a yellow rain warning with the Met Office saying that heavy rain “may lead to further disruption for recently flood hit communities.”

A yellow rain warning has been issued for much of northwest England between 12am on Friday and 9am on Saturday, affecting Lancaster, Manchester and Carlisle.

Between 10am on Friday until 10am on Saturday, the Met Office has also issued a yellow rain warning for most of Northern Ireland. 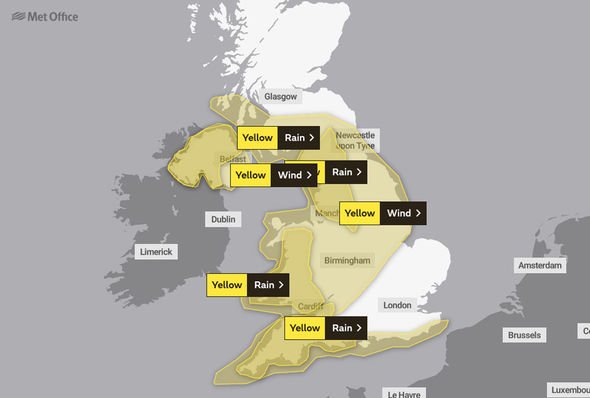 Chief Meteorologist at the Met Office, Paul Gundersen, said: “This weekend we’ll see another named Storm bring strong winds to parts of the UK with several wind and rain warnings in place.

“On Friday a band of rain associated with Storm Jorge will move across the UK – we have issued rain warnings for parts of Wales and northern England, where rain will be heaviest and we could see 60-80mm possible over the highest ground.

“Where warnings are in place gusts of 50-60mph are likely quite widely with 65-70mph possible in coastal areas, however, the strongest and most damaging winds are expected across the Republic of Ireland.”

On Saturday there is a yellow wind warning from 12pm until 12pm on Sunday.

The Met Office warning says: “A spell of strong winds is expected to move northeast across a large swathe of the UK through Saturday afternoon and Sunday morning.”

Major cities affected by the warning include Birmingham, Cardiff, Newcastle upon Tyne, Belfast and Portsmouth. 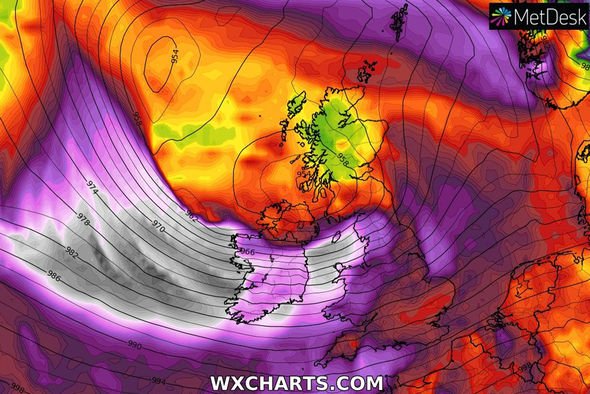 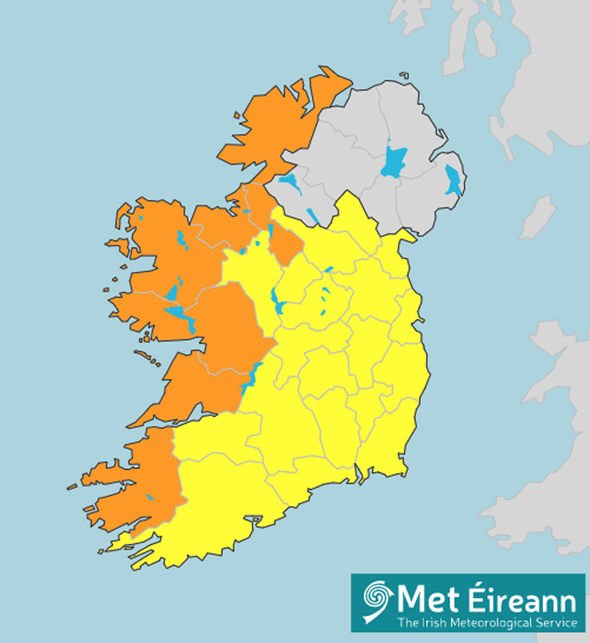 In Ireland, Met Eireann has issued an orange wind warning from 6am on Saturday until 3am on Sunday for Galway, Mayo, Clare and Kerry where wind speed will be between 65 and 80kmh with gusts of 110 to 130kmh, “possibly higher in very exposed areas with an elevated risk of coastal flooding”.

A similar orange warning is in effect in Donegal, Leitrim and Sligo from 12pm on Saturday until 3am on Sunday.

A yellow wind warning for Leinster, Cavan, Monaghan, Roscommon, Cork, Limerick, Tipperary and Waterford runs from 9am on Saturday until 3am on Sunday.

And a yellow rain warning affects Munster, Connacht and Donegal all of Friday and Saturday where there’s a continuing risk of flooding due to already saturated ground and elevated river levels.