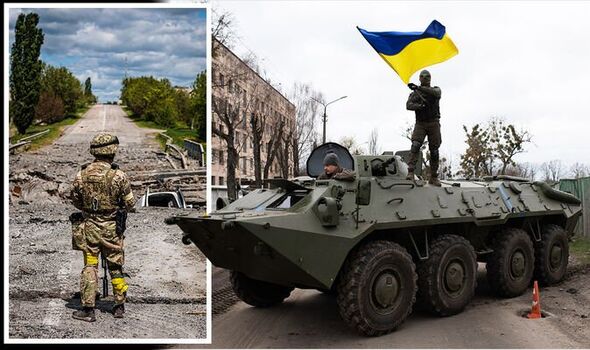 In a highly symbolic moment, troops planted the border post adorned In yellow and blue after successfully pushing the invaders back into their own territory for the first time in three months. Beaming for the camera, the battle-hardened Ukrainian infantry-men then declared: “We have arrived. We are here.” The scenes were played out north-east of the second city of Kharkiv, where Vladimir Putin’s troops have been driven back for the last week.

It was not immediately clear how many had reached the Russian border or the exact location, but the new retreat of his forces will come as another blow to Putin.

And the Ukrainian defence ministry later published a video showing a number of the soldiers from a territorial defence brigade at the unspecified location on the frontier.

Flashing “V” signs for victory, and gathered round the makeshift blue and yellow border post, the soldiers addressed their President Volodymyr Zelensky directly.

“We have arrived, we are here,” one of the soldiers is triumphantly heard to say.

Governor Sinegubov confirmed that the troops had restored a sign marking the border and the start of Ukrainian territory.

“We are proud of the soldiers… who restored the border sign on the state border!” he wrote on Telegram.

“We thank everyone who, risking their lives, liberates Ukraine from Russian invaders,” he added.

General Sir Richard Barrons, former commander of UK Joint Forces Command, said Russia’s inability to take over Kharkiv should be regarded as a defeat for the country.

“It was just way too big an objective for the Russian military,” Sir Richard said, adding that Russia “doesn’t have the numbers, the will or the skill to take large cities”.

“When [the Russians] got stuck round outskirts, it became an easier target for a very aggressive and successful Ukrainian counter-attack, and trying to sit around Kharkiv became much less important than the fight under way in the Donbas,” he said.

Ukraine has been driving Russian forces away from Kharkiv, the second-largest Ukrainian city, for the past week after forcing them from the outskirts of the city.

It remains to be seen if the Kremlin forces will be redeployed elsewhere in the Donbas.

But across the entire 300-mile Eastern front, Russian forces have made very little progress.

And Nato’s secretary general said that such were Russian failings, that he now believed Ukraine could win the war.

Jens Stoltenberg also said Putin’s invasion of Ukraine was clearly not going to plan and that its attempt to capture the eastern Donbas region had all but “stalled” – an assessment backed up by the UK’s military.

This followed another alarming assessment from the UK’s Military of Defence which estimated that Russia has lost about a third of its combat troops – either killer or injured – so far during the three months of conflict.

But Ukraine was nevertheless preparing for a major new Russian push in the eastern Donbas region.

President Zelensky warned that while the first Kremlin offensive in the east had so far been beaten back, home forces were digging in for a renewed onslaught.

“We are preparing for new attempts by Russia to attack in Donbas, to somehow intensify its movement in the south of Ukraine,” President Zelensky said in a televised address.

“The occupiers still do not want to admit that they are in a dead-end and their so-called ‘special operation’ has already gone bankrupt.”

After failing to take the capital Kyiv at the beginning of the invasion in late February, control of the Donbas in the East has become Moscow’s main objectives.

But like elsewhere in the war, Russian generals have been surprised by the level of resistance from Ukrainian forces who have repeatedly repelled them.

And President Zelensky once again called on the West to impose an oil embargo on Russia.

“We are also working to strengthen sanctions on Russia. Partners need to make decisions that limit Russia’s ties to the world every week,” he said.

“The occupiers must feel the rising cost of war for them, feel it constantly.”

President Zelensky, when asked about the issue of the besieged southern city of Mariupol, conceded that his generals simply did not have the military means to push the Russians out and to free that deadlock, as things stood.

And the increasingly desperate wives of the Ukrainian soldiers left defending the Azovstal steelworks in Mariupol said that food and water were running out.

Ukrainian authorities also warned that at least 3,000 evacuated Mariupol residents were now being held in a Russian “filtration camp” – a centre for housing civilians before they are evacuated – in the Donetsk Region.

Russia has set up its so-called filtration camps in numerous locations outside Ukraine but many Ukrainians have given chilling accounts of life in these centres, one describing them “like a true concentration camp”.

Elsewhere on the ground, fighting continued around the city of Izyum in the northeast, which the Russians now occupy, and Kremlin forces’ shelling in Severodonetsk was also said to have killed 10 civilians.