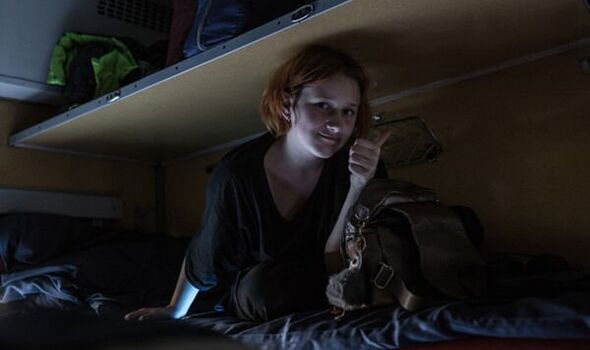 Their horrifying plight came to light as it was also claimed troops in the besieged city of Mariupol “are covering their tracks” by burning the bodies of murdered civilians in a mobile crematorium. Mayor Vadym Boychenko accused the Kremlin’s killers of turning the city into “a death camp” with thousands of civilians still trapped in cellars and living without food, medical supplies or drinking water. Mass graves were also reportedly found near Kyiv in areas previously occupied by Russia’s army.

In Ivankiv, a town in Kyiv Oblast, the region surrounding the capital, Deputy Mayor Maryna Beschastna broke down in tears as she described atrocities committed in the town before Putin’s troops left.

She said: “There was a case in one village, two sisters were raped… girls of 15 and 16… children. Women were pulled by their hair out of their basements, so that they could abuse them.

“Girls started cutting their hair short to be less attractive, so no one looks at them any more.”

Mariupol’s City Council said the Kremlin’s soldiers are using mobile crematoriums to burn the bodies of murdered civilians and destroy evidence of war crimes in the besieged port city.

In a statement on Telegram, it said: “Russia’s top leadership ordered the destruction of any evidence of crimes committed by its army in Mariupol.”

“They collect and burn the bodies of Mariupol residents murdered and killed as a result of the Russian invasion.”

“In addition, all potential witnesses to the occupiers’ atrocities are being identified through filtration camps and destroyed.”

“Unfortunately, the eerie analogy is gaining more and more confirmation. This is no longer Chechnya or Aleppo. This is the new Auschwitz.”

Mayor Boychenko said: “The scale of the tragedy in Mariupol the world has not seen since the times of Nazi concentration camps. The racists turned our whole city into a death camp.”

Exhausted and traumatised survivors who managed to escape in a convoy from the Black Sea port to Zaporizhzhia yesterday said there are bodies “all over the streets” and people are being buried in shallow graves.

After 1,000 people made it out, the International Committee of the Red Cross said rescue teams were relieved to help them “leave hell”.

Mother and daughter Tetiana and Yulia arrived to relative safety in their own vehicle shortly before the convoy left Mariupol. They said they survived in the city by drinking dirty water from a well.

There are starving people,” said Yulia. “People are having mental breakdowns.”

“People are being buried in the streets. Shallow graves, half a metre deep at best, there are dead bodies all over the streets.”

It also emerged more than 400 people are missing from the former Russian occupied town of Hostomel, near Kyiv.

“Witnesses say some were killed, but their whereabouts are still unknown.”

Boris Johnson yesterday commented on disturbing images of tied bodies shot at close range in the streets of Bucha.

The Prime Minister said: “I’m afraid when you look at what’s happening in Bucha, the revelations that we are seeing from what Putin has done in Ukraine doesn’t look far short of genocide to me.”

He added: “It is no wonder people are responding in the way that they are. I have no doubt that the international community, Britain very much in the front rank, will be moving again in lockstep to impose more sanctions and more penalties on Vladimir Putin’s regime.”

Western officials have said they fear Russian atrocities against Ukrainian civilians may be intensified by comments in Putin’s media calling for the “de-nazification” of Ukraine and comparing the country to the Third Reich.

They said: “When you combine that with a force which is failing and failing badly in an operation for which it was perhaps psychologically underprepared, it is just a toxic mix. The responsibility for this lies with the perpetrators of the acts but also with the Russian leadership.”