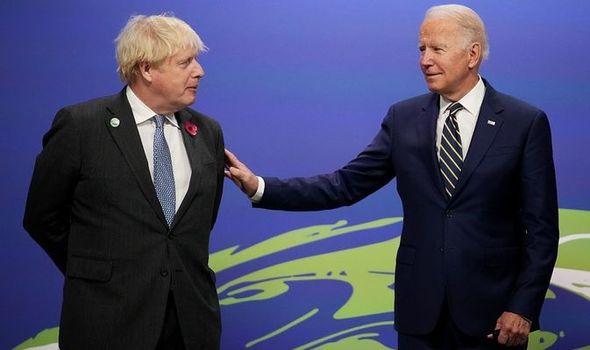 The US President had pledged his “unwavering support” for Ukraine against Moscow and warned Vladimir Putin, 69, that America could impose sanctions on Russia if it crossed the border.

The Kremlin is believed to have mobilised some 70,000 troops on the Russian-Ukraine border.

But Ukrainian President Volodymyr Zelensky, 43, said on Monday Kyiv’s forces were capable of fending off a Russian onslaught during a military display day of US armoured vehicles and patrol boats.

He said in a statement: “The servicemen of the Armed Forces of Ukraine continue to fulfil their most important mission – to defend the freedom and sovereignty of the state from the Russian aggressor.”

Despite Mr Zelensky’s comments, Washington fears Russia could invade the ex-Soviet satellite state as early as 2022.

A Downing Street spokesperson confirmed Mr Johnson held talks with the 46th US President and their NATO allies.

“The leaders agreed that recent meetings of the G20 and of NATO Foreign Ministers had been useful forums for discussions on this issue.

“They emphasised the need to provide a united front in the face of Russian threats and hostility.

“The leaders called on Russia to de-escalate tensions and reaffirmed their staunch support for Ukraine’s territorial integrity.

“The Prime Minister reiterated the points he made to President Putin when they spoke earlier this year in this regard, and which the Foreign Secretary also made to her Russian counterpart last week.

“The Prime Minister said the UK would continue to use all the economic and diplomatic tools at its disposal to prevent any Russian aggression against Ukraine.

Mr Putin will speak to Mr Biden via video call on Tuesday.

White House spokesperson Jen Psaki, 43, said: “Biden will underscore US concerns with Russian military activities on the border with Ukraine and reaffirm the United States’ support for the sovereignty and territorial integrity of Ukraine.”