Home » World News » What to Cook This Weekend

Dorie Greenspan has three cakes, two sweet and one savory, that are perfect for a baking project. 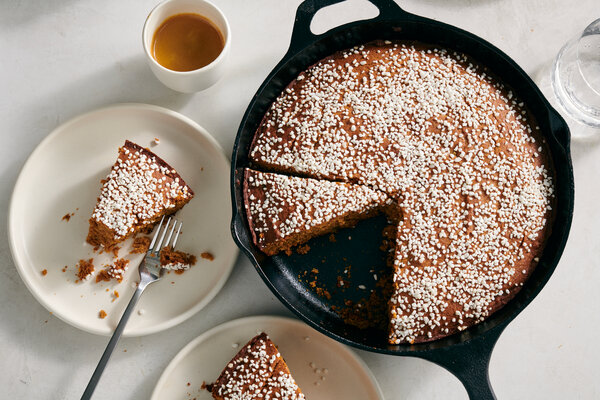 Good morning. Dorie Greenspan returned to The Times this week with a paean to the joys of kitchen cakes — simple, largely unadorned cakes meant to be stored on a counter and snacked on at will. In a season that’s filled with fancy (check out Yotam Ottolenghi’s kumquat and chocolate yule log), kitchen cakes are a satisfying, unfussy balm and a great baking project for the weekend.

Try Dorie’s skillet gingerbread cake with apple butter (above), for instance, which is Christmas-scented and excellent with a glass of milk or a cup of tea. Also, her cranberry spice Bundt cake, tall and regal even if you forgo the cranberry icing. And because there’s no rule that says that a kitchen cake must be sweet, Dorie has a savory one, as well: a ham and cheese loaf with red peppers and three cheeses.

What else to cook this weekend? Hanukkah gets underway on Sunday evening, so you might want to cook a brisket in sweet-and-sour sauce on Saturday. That will give it enough time to cure to perfection in the refrigerator for the following night, to eat with latkes and jelly doughnuts for dessert.

I might go with portobello “steak” au poivre myself, with a thatch of watercress and a pile of French fries. Or maybe chicken and mushroom juk with scallion sauce? Sri Lankan dal with coconut and lime kale? Creamy lemon pasta? I’ll definitely make chicken paprikash with generously buttered noodles for dinner on Sunday.

I want to cook without a recipe, too, with a riff on my pal Derr’s barbecued shell-on shrimp: a full half-pound per person, tossed with some watered-down barbecue sauce, seared on the grill or under the broiler, and then served with steamed artichoke and lemon butter. Finger food! So delicious.

There are thousands and thousands more recipes to cook this weekend waiting for you on New York Times Cooking — and further inspiration on TikTok, Instagram and YouTube. Go see what you find.

Yes, you need a subscription to get the recipes. Subscriptions support our work and allow it to continue. If you haven’t done so already, I hope you’ll consider subscribing today. (If you are feeling the holiday spirit, you can also buy gift subscriptions for family and friends.)

Please write for help, if you run into trouble while signing up or have an issue with our technology: [email protected] Someone will get back to you. You can also write to me, if you’re mad or glad or just want to say hello. I’m at [email protected] I read every letter sent.

Now, it’s nothing to do with spatchcocking chickens or baking a gingerbread bûche de Noël, but the actress Molly Ringwald has a delightful personal history in The New Yorker this week, about working with Jean-Luc Godard in 1986, when she had “just graduated high school — both in real life and in the films of John Hughes.” It’s charming.

“Three Pines,” on Amazon Prime, is based on Louise Penny’s novels about Chief Inspector Armand Gamache of the Sûreté du Québec police force. The books are a little cozier, and sometimes darker, but Alfred Molina, as Gamache, is wonderful to watch.

Colin Burrow is in The London Review of Books with a smart takedown on Roald Dahl — “his key skill was his ability to repress nastiness while keeping it visible” — that’s well worth reading.

And, finally, Lana Del Rey has a new single, “Did You Know There’s a Tunnel Under Ocean Blvd.” That’s a lot of words, but she makes them into what my colleague Lindsay Zoladz called a “hypnotic incantation.” Play that loud while you’re baking, and I’ll see you on Sunday.