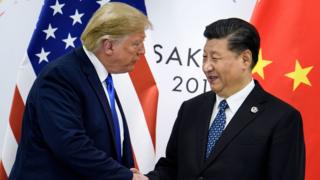 Tensions between the US and China are longstanding but the pandemic and a looming presidential election have amplified the rivalry, and this week the war of words hit a new peak. What’s the US strategy?

This week President Donald J Trump turned a corner with his 2020 re-election campaign.

“China will do anything they can to have me lose this race,” he told the Reuters news agency.

His sharpening rhetoric against Beijing marked a new phase in an effort to reframe an election that’s been reshaped by the coronavirus pandemic.

And it signalled rockier times for the already rocky relationship between the world’s two biggest economies.

The Trump campaign had planned to make America’s booming economy its centrepiece, but that has tanked. And polls show decreasing support for the president in key battleground states amidst criticism of his corona crisis performance.

Enter China, the origin of the pandemic and accused of acting too slowly to stop its global spread

Mr Trump’s allies in the America First Action (AFA) political committee have been rolling out advertisements lashing “Beijing Biden” for “leading the charge” of a Washington elite too willing to accommodate a predatory China.

Mr Biden has hit back with an advert that accuses the president of trying to deflect blame for his own slow response to the pandemic, and of being too trusting of China’s initial information about the virus.

The common element in these starkly different positions is that both campaigns believe it’s good politics to argue their man will be strongest in taking on Beijing.

“If you look at the most recent Pew poll and Gallup poll, Americans’ distrust of China, whether you’re Republican or Democrat, is at an all-time high,” roughly two-thirds of the country, says the AFA’s Kelly Sadler. “This is a universal issue that Republicans and Democrats can both agree on.”

There’s certainly been a dramatic uptick in negative views of China since Mr Trump took office and dialled up the trade war.

When it comes to Beijing’s culpability for the corona crisis, however, he has regularly wavered, at times lavishing praise on President Xi JinPing, at times lashing the “Chinese Virus.” But he’s now started to adopt the hardline campaign-speak, vowing to make China pay for the damage.

The aggressive rhetoric builds on a growing fury in the administration and amongst multiple lawmakers at the Chinese government’s lack of transparency about a virus that has brought global disaster.

Secretary of State Mike Pompeo has been out front on this. He regularly declares that the Chinese communist party can’t be trusted. He focuses attention on Beijing’s inability to contain the virus shortly after it emerged, and questions the security of its laboratories, all charges that China vigorously denies.

There are concerns about China’s behaviour across the political spectrum, says Michael Green, who was an Asia advisor for President George W Bush. But members of Mr Trump’s national security team have “a very zero sum view of relations with China and are particularly focused on preventing China from getting any advantage out of any situation.”

President Xi JinPing’s playbook is also “much more aggressive” than his predecessors,” says Mr Green, noting a robust Chinese propaganda campaign that’s even suggested the virus came from the US military. “There’s a zero sum ideological and geopolitical spin on the ball coming out of China that predates Donald Trump.”

But that nationalist authoritarian turn has clashed with the Trump administration’s America First nationalism, increasing confrontation and preventing the kind of cooperation that could combat the pandemic and prevent a new one.

Mr Green notes that before President Trump took office there were more than two dozen American and Chinese staff experts from the Center for Disease Control “working these issues” in Beijing. When the crisis broke out there were three or four, although he says both governments are to blame for that.

The national security experts are countered by the “New York globalists” in Mr Trump’s inner circle, who argue that the United States needs China for business and trade.

“The relationship between China and the United States is going to be very uneven going forward,” says Gary Locke, a Chinese American who was President Barack Obama’s ambassador to Beijing. “It will be antagonistic at one level, but also seeking great cooperation on…the economic front, because so many American farmers depend on China (to buy) what they produce.”

As the election approaches Mr Trump has signalled that he will listen more to the hawks than the doves in his coterie of conflicted advisors. And he’ll be cheered on by a number of Republican lawmakers who’ve been pushing the administration to stand up to China.

Several have introduced legislation or floated ideas that would punish Beijing for concealing or distorting information about the coronavirus. The states of Missouri and Mississippi have taken the unprecedented step of suing for damages.

And the party’s fiercest China critic, Senator Tom Cotton, has gone to the extreme of accusing the Chinese government of deliberately allowing the virus to escape it’s borders, “because if they were going to suffer an economic contraction they were not going to allow the world to continue to prosper.”

But his call to bring supply lines back to the United States will have bipartisan resonance as the pandemic has focused glaring attention on America’s dependence on China for drugs and medical equipment.

Crucially, there’s concern that the anti-China rhetoric is reinforcing an atmosphere of xenophobia already growing because of the pandemic, resulting in an increase of verbal and physical attacks on Asian Americans.

“Just because I’m Chinese American doesn’t mean that I’m a Chinese government official,” Gary Locke noted wryly of his unexpected appearance in the Trump campaign’s advert bashing Joe Biden. Mr Biden’s team has also been criticised on the left for “out-Trumping Trump” rather than challenging a “racist nationalistic” conversation.

Both campaigns have denied stoking xenophobia. But China’s been placed squarely in the middle of an election at a time when voters are angry and afraid for their livelihoods. By November they could be angrier and poorer. Their ballots will show who they blame.