Home » World News » When will it rain? The EXACT dates UK can expect rainfall as British reservoirs run dry

Rainy weather would usually be the last thing on most Britons’ minds in late summer, but an unusually dry 2022 has left the UK in a precarious position. Little rainfall has the country on the verge of drought, as Thames Water, Southern Water and South East Water have all announced their first hosepipe bans in years. Drought would have a wide-ranging impact on British society, but forecasts suggest the country can expect some respite over the next few months.

When will it rain?

Weather forecasters have pinpointed rain spells across the UK over the next two weeks that will briefly break the long-enduring heatwave.

After temperatures rise to 32C for the next few days, a helping of rain should douse the heat-baked ground from Monday, August 15.

The coming showers will douse parched ground across the country in short bursts from next week. 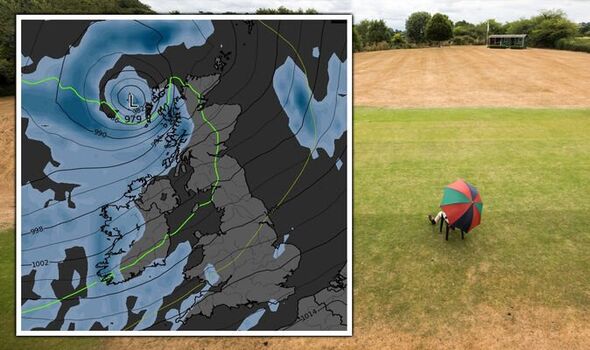 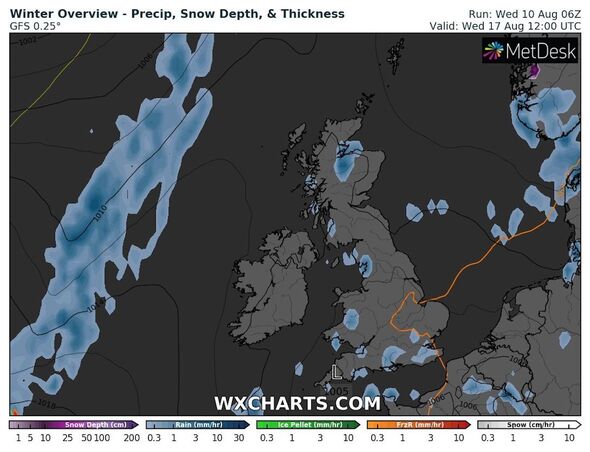 As the clock strikes midnight on August 15, rain will start pouring across the UK’s high ground from Scotland from Edinburgh to Inverness.

Rain totals will reach 1mm per hour at most, while showers further south stick around the Lake District in Yorkshire and Snowdonia National Park in Wales.

Britons living in these areas and parts of Dorset can expect up to 0.3mm per hour, not near enough to make a significant difference to the country’s fortunes.

The rainy system will gradually gather pace in the evening, with showers extending in a band across the west coast. 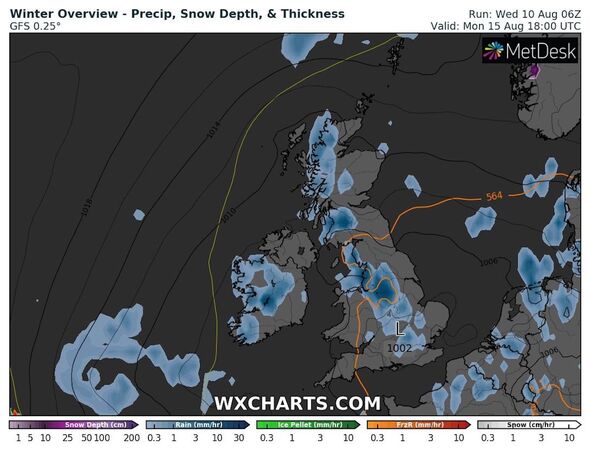 The band will stretch from Plymouth in the south to Birmingham, Manchester and other east coast cities like Blackpool further north.

London should see some rain in the evening between 4pm and 7pm on the day, but charts show only a trickle, around 0.1mm per hour.

The picture remains the same until Wednesday, August 17, when another system tips out double-figure rainfall totals over the west coast.

All of Wales, English cities like Plymouth, Manchester, Liverpool and Blackpool and the entire Scottish west coast can expect up to 20mm per hour between 6pm and 12am. 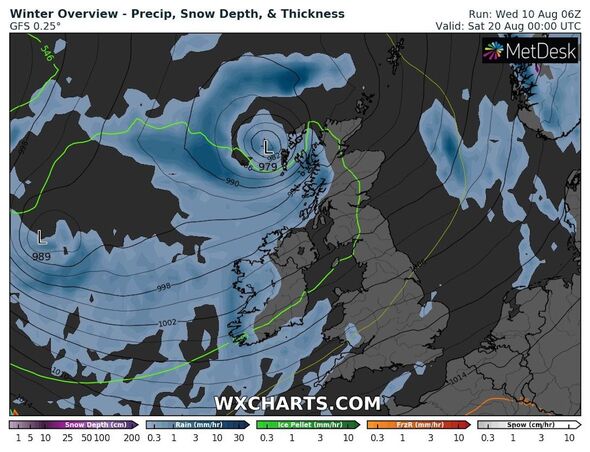 The following days and the latter half of August are less accurately represented on weather charts, as the atmosphere is more “chaotic” the further ahead forecasts look, according to the Met Office.

Regardless, the long-range forecast suggests more rain will break up any future hot spells.

While many will hail the news, the UK faces several tough months ahead if that rain doesn’t prove significant enough.

Northend, a community between Buckinghamshire and Oxfordshire, has become the first to go without running water due to the excessive heat.

The town receives water via Thames Water, which distributes supplies from the now dry nearby Stokenchurch Reservoir.

The company provided residents with bottled supplies to ensure they don’t go without, while propping the network with tankers.

Reservoirs are also drying up across the country, raising the possibility that other communities may soon experience similar issues.