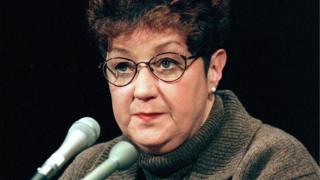 The woman behind the 1973 ruling legalising abortion in the US is seen admitting in a new documentary that her stunning change of heart on the issue in later life was “all an act”.

Norma McCorvey, known as Jane Roe in the US Supreme Court’s decision on Roe v Wade, shocked the country in 1995 when she came out against abortion.

But in new footage, McCorvey alleges she was paid to switch sides.

The documentary, AKA Jane Roe, airs this Friday on the US channel FX.

The programme was filmed in the last months of McCorvey’s life before her death at age 69 in 2017 in Texas.

In her “deathbed confession”, as she calls it, a visibly ailing McCorvey says she only became an anti-abortion activist because she was paid by evangelical groups.

“I was the big fish,” she says. “I think it was a mutual thing. I took their money and they’d put me out in front of the cameras and tell me what to say.

She added: “If a young woman wants to have an abortion, that’s no skin off my ass. That’s why they call it choice.”

After her mid-1990s conversion to become a born-again Christian, McCorvey disavowed Gonzalez, even as they continued to live together.

The documentary touches upon another irony of McCorvey’s life – that she herself never had an abortion.

She was pregnant with her third child in 1970 when she was referred to two lawyers who wanted to challenge laws in Texas banning abortions except where the mother’s life was at risk. The case went all the way to the highest court in the land and ultimately changed America.

The Reverend Robert Schenck, one of the evangelical pastors who worked with McCorvey after her conversion to Christianity in the mid-1990s, also features in the documentary.

The minister acknowledges McCorvey was paid for her appearances on the movement’s behalf. The programme says it was as much as half a million dollars.

“I knew what we were doing,” Mr Schenck says. “And there were times when I was sure she knew.

“And I wondered: ‘Is she playing us?’ What I didn’t have the guts to say was: ‘Because I know damn well we’re playing her.'”

In a highly self-critical blog post on Tuesday, Mr Schenck said the documentary had made him cry and he hoped that people would watch it.