Six days after Cyclone Idai, rescuers scramble to save hundreds stranded by floodwaters amid fears death toll will rise.

Rescue workers in Mozambique are racing against time to save hundreds of people clinging onto roofs and trees around the devastated city of Beira.

Aid workers on Wednesday spoke of women trapped in trees “throwing their babies” onto rescue boats. They talked of plucking people from head-deep water, only to strand them in patches of land where the water reached their ankles.

Cyclone Idai hit Beira with winds of up to 170 kilometres per hour last Thursday, then moved inland to Zimbabwe and Malawi, killing hundreds and putting the lives of millions at risk.

United Nations officials say this could be the worst ever weather-related disaster to have struck the southern hemisphere.

Authorities say at least 217 people have died in Mozambique, 139 in Zimbabwe and 56 in Malawi, but the death toll is likely to rise as rescuers continue to find bodies.

Mozambican President Filipe Nyusi, who has declared a national emergency and three days of mourning starting on Wednesday, has warned that the eventual number of those killed in the cyclone and flooding could rise to more than 1,000.

According to earlier estimates by the International Federation of Red Cross and Red Crescent Societies, 90 percent of Beira and its surrounding areas appear to be “completely destroyed”.

Josias Elias, found clinging to a tree almost submerged in water, said his entire village near Beira was flooded.

“There’s no more reason to go back. All of our houses have been destroyed,” he told Al Jazeera.

On Tuesday, rescuers saved 167 people around Beira with the help of South African Air Force helicopters.

On Thursday, Mozambique’s minister of land and environment said 3,000 people have been saved across the country, while 15,000 still needed to be rescued.

“The devastation is vast. As far as the eye can see, it’s just water, you can’t see any land,” Travis Trower, of the group Rescue South Africa, told Al Jazeera in Beira.

“Paddling through water, and seeing [survivors] in the trees was absolutely devastating.”

Recounting one rescue operation in the area on Friday, he said: “The women were throwing their babies from the trees into our paddle boats. We only managed to get only 20 children before we had to call off the operation.

“Unfortunately, when we went back to that place in the morning, those people were no longer there.”

Six days after the cyclone made landfall, rescuers are still in the “life-saving phase”, said Pedro Matos, emergency coordinator for the UN’s World Food Programme (WFP) in Mozambique.

“We are now at the point of taking people who have water up to their heads and taking them by helicopter or boat to places where they are stranded up to their ankles,” he told Al Jazeera in Beira.

“We are not even at a phase where we can do medical assessments because they have been out there for many days drinking stale water with bodies and animals.”

The full extent of the devastation will only be known once floodwaters from torrential rains recede. It will be days before Mozambique’s inundated plains drain towards the Indian Ocean, and aid groups have warned the waters are still rising.

Speaking from a school where hundreds had taken shelter, Miller said: “There are several families crammed into one classroom. They may have found shelter, and some water has been delivered, but there is little in the way of food.”

Dimo Marquez, a resident of Manica Province along the border of Mozambique and Zimbabwe, told Al Jazeera he had “lost communication” with his aunt and three cousins in Beira, as cyclone winds had knocked down communication lines in and around the area and as floodwaters had washed away roads to the city.

“The city is virtually non-existent now. I just want to see all of them alive again,” Marquez said from Manica. 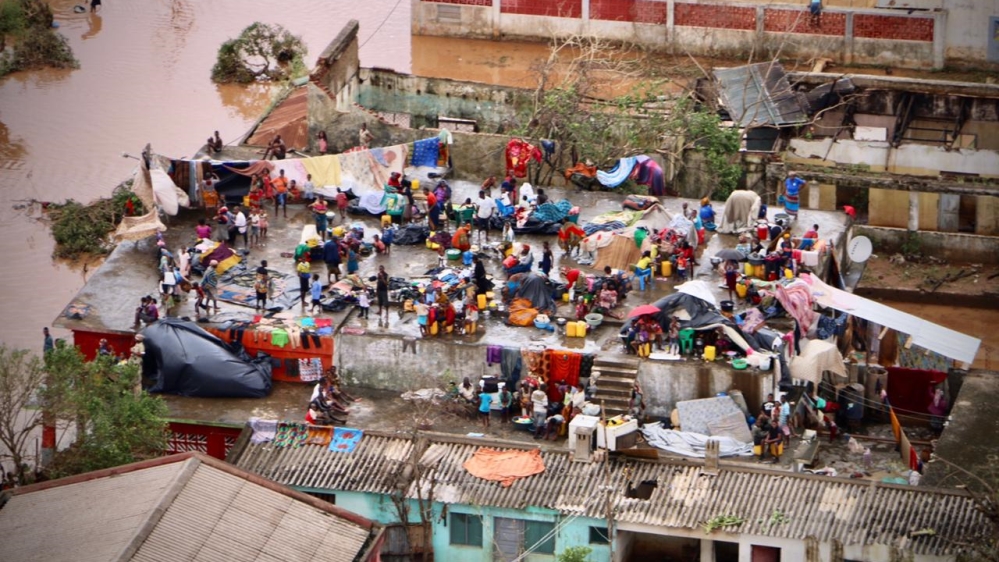 Meanwhile, the UN’s humanitarian office said the central area of Buzi, populated by some 200,000 people, was at risk of becoming “at least partially submerged”.

The WFP said the cyclone and flooding have affected at least 2.6 million people in the region, causing a “major humanitarian emergency that is getting bigger by the hour”.

The agency said analysis of satellite imagery suggested that up to 1.7 million people in the country had been in Idai’s path. Another 920,000 were affected in Malawi.

“Everyone is doubling, tripling, quadrupling whatever they were planning” in terms of aid, said Caroline Haga of the Red Cross in Beira. “It’s much larger than anyone could ever anticipate.”

The European Union released $3.9m in emergency aid, and Britain pledged up to $7.9m.

The chairman of the African Union Commission said it would provide $350,000 in immediate support to the countries. The United Arab Emirates pledged $4.9m to Mozambique, Zimbabwe and Malawi, the Emirates News Agency reported, citing the Emirates Red Crescent. Norway said it was providing $700,000.

Tanzania’s military has sent 238 tonnes of food and medicine, and three Indian naval ships have been diverted to Beira to help with evacuations and other efforts.

Enock Muchingo contributed in this report from Manica Province in Mozambique.