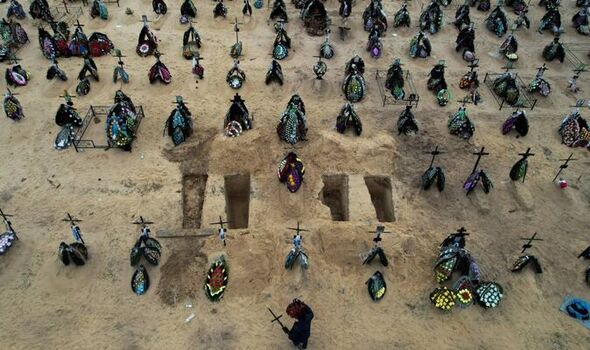 An overnight barrage of bombing left a trail of death and devastation – a signal Vladimir Putin had begun his anticipated assault to take the East.

Mr Zelensky said: “Russia has begun the battle for the Donbas, which they have been preparing for a long time. A large part of its army is now dedicated to this offensive.”

He vowed: “No matter how many Russian troops are driven there, we will fight. We will defend ourselves. We will do it every day.”

Rockets also hit Odesa and Dnipro as Putin – frustrated by his forces slow progress and embarrassed by the sinking of his military’s flagship in the Black Sea – ordered an escalation of his bombardment.

Just a day after missiles killed five and injured 13 in the second city of Kharkiv, the attacks increased.

The heaviest action came in Lviv in the west, where residents woke to air raid sirens and explosions in an area that had so far evaded most of the carnage. This was a rare deadly attack on the city just 40 miles from the border with Poland that has been spared much of the fighting since the invasion began on February 24.

He added: “We can confirm that seven people are dead and a child was among the victims.”

“People here had thought they were relatively safe. There had been one missile attack reported on the edge of the city since the start of the invasion. It’s a real reminder to people of the risk they face here.”

The attack on Lviv was the furthest west the Russians have reached – leading many to see it as a softening-up exercise.

The city is the hub through which tens of thousands of people have fled to neighbouring Poland.

Mayor Andriy Sadovyi admitted that the latest strikes showed there were now “no safe and unsafe locations” in Ukraine.

In Mykolaiv, near the Black Sea port of Odesa, officials told of “continuous rocket attacks” while in Dnipro, air raid sirens were also now “near-constant”.

In Donetsk, heavy shelling continued in the Siversk and Pokrovsk settlements earlier yesterday.

Elsewhere, Russia’s advance in the South East continued as the city of Kreminna fell.

The Mayor there accused Putin’s troops of executing people trying to leave. Increased Kremlinordered military action was being reported across the entire country.

These planes have been used a number of times to strike areas of Ukraine with non-nuclear weapons, notably Kh-55 and Kh-101 air-launched cruise missiles.

Experts pointed out the intensified attacks showed the clear intent from Putin. Justin Crump, a military analyst and chief executive of the intelligence consultancy Sibylline, said it was obvious Russian forces were now accelerating the tempo of the campaign.

Mr Crump, a Royal Armoured Corps veteran, explained that, from a strategic point of view, the Kremlin had not targeted Ukraine’s infrastructure early enough.

What was happening now was that they were catching up to stop supply lines getting to Donbas, the region that has now become the focus of Moscow’s attentions.

Ukraine’s armed forces said that Russian commanders were completing the formation of an “aggressive group” in the Eastern Operation Zone.

Despite this escalation of the bombing, there were still some Ukrainian successes.

Russian attempts to storm Novotoshkivsk, Popasna in Luhansk plus Avdiyivka and Maryinka in Donetsk were described as “unsuccessful”.

Terrified residents of Luhansk were again yesterday urged to evacuate immediately with the authorities warning it might be the final opportunity for civilians to get away safely.

Sergei Gaidai, head of the region’s administration, said: “Next week may be difficult. This may be the last time we still have a chance to save you.”

Russian forces are now concentrating on capturing Luhansk and Donetsk, which are part of the Donbas region, an old coal and steel-producing area.

Putin publicly recognised the entirety of the two eastern regions as independent of Ukraine shortly before he ordered the invasion.

And after Russian forces withdrew from Kyiv in the north, Ukraine’s armed forces have been preparing themselves to face up to a brutal Russian offensive in that eastern region.